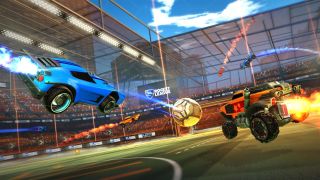 The debate around loot boxes - digital grab bags full of randomized rewards - rages on. As more countries label the practice akin to gambling, developers and publishers have had to adjust their behavior. While the United States has thus far given loot boxes a wider berth and does not require game makers to disclose drop chance percentages, the studio behind Rocket League has gone ahead and done exactly that.

In a blog post on the official Rocket League site, Psyonix breaks down the chance you have to receive each level of customization item via a Rocket League Crate (what Psyonix calls its loot boxes). They are:

If you're new to Rocket League, here's a bit more explanation on how these Crates work. Crates themselves are a random drop, and must be opened with keys or decryptors. Keys can be purchased for real-world money, while decryptors can be earned during special events, such as the game's Halloween event. Crates do not contain items which would increase a player's power or stats - only cosmetic changes.

Psyonix notes that its rates have not changed since the Crates system launched in September 2016, and even broke down exactly how a Crate's algorithm determines your reward. First, the system determines what quality (Rare, Very Rare, Import, Exotic, or Black Market) of customization item you'll receive. Then, it picks which item within that category to award, and all items within a given category have an equal chance of dropping. Lastly, it determines if the item will feature Painted or Certified attributes.

I'm a bit torn on this. On the one hand, I'm glad Psyonix is disclosing this information in what seems to be an effort to be more transparent with its players. On the other, randomized rewards have never quite sat as well as just being able to buy the thing you want with me. But back to another positive, I imagine knowing exactly how rare some Rocket League items are might take some sting out of not getting the ultra-rare loot you want. But on the flipside of that, would you still feel as motivated to buy a Crate if you know you only have the slimmest of chances at getting something really good?

At the end of the day, the industry is clearly still trying to figure out how best to implement loot boxes, and Psyonix finally being upfront about a player's chances is just one of many approaches. But I'm curious: what do you think?

Speaking of rare loot, feel free to learn from my personal misfortune - after years of trying, I finally got the rare loot I always wanted from WoW... and didn't know what to do with myself.