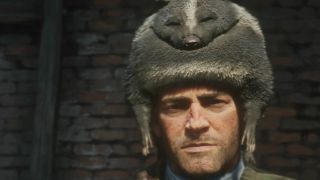 It doesn't play a huge part in the main story, but knowing some Red Dead Redemption 2 hunting tips will help you out with one of the biggest pastimes and side quests in the game. Knowing how to hunt well is essential for keeping food on the table at your camp, and if you want to craft gear upgrades or trade pelts then you'll need to be able to harvest quality kills. That's not to mention the hunting challenges you can take on in Red Dead Redemption 2, so having a good understanding of the hunting mechanics in action will let you get the most from the game. That's where our top Red Dead Redemption 2 hunting tips come in, so read on and we'll show you how to get the best from your hunts without risking your own skin while you do it.

Want to go hunting some Red Dead Redemption 2 legendary animals? Then check out our guide or the video walkthrough below:

1. Make sure you have the right equipment

Early on a hunting mission with Charles will teach you to use the bow, but there are actually much more efficient ways of taking down a fuzzy or feathery target.

As soon as you can afford it, head to a gunsmith and grab a varmint rifle. This isn't too pricey and is essential for getting clean kills on smaller creatures like rabbits and beavers.

A rifle is going to be your go to for bigger game, and you need to invest in the best scope possible. I like the Rolling Back scoped rifle, which you grab at any purveyor of weapons. It makes picking off elk or boar - before you can get to close to spook them - a breeze.

Accuracy matters when you're hunting, so Dead Eye is perfect for when you're being charged by a bear but want to get a clean kill. Once your Dead Eye is levelled up to a 4 it will helpfully highlight an animal's vulnerable spots like the heart, get it to level 5 and it will also show lungs and stomach. While a single shot to the lungs with a scoped rifle might not be an instant kill, if you track the animal for a short distance after you've shot it it will usually collapse, leaving you to finish it off with your knife. Sorry PETA.

The real time work of crafting better arrows or notching the top of all your ammo might seem like a frustrating way to spend an evening, but it will really pay off for the dedicated hunter. Something as simple as painstakingly nothing all your rifle ammo into split points will increase damage, and making improved arrows and poison (for bigger game) and small game arrows makes silent stalking much easier.

4. Trappers are your new besties

Once you've sold a perfect pelt to a trapper, you can then pay them to craft a series of increasingly ridiculous headgear and clothing options. Nothing says "I'm playing the coolest game of 2018" like running around St Denis with a skunk corpse - complete with face - soaking up your pomade. As well as buying from you, he's also your man for bait and cover scent lotion.

5. How to get those perfect pelts

Unless the camp needs meat or you're just determined to kill every living thing you see, it's barely worth killing an animal unless it has a pristine pelt. You're going to want to study it through a scope or your binocular, and look out for the stars in the bottom right. You'll need a three star animal for a perfect pelt or carcass, which is essential for crafting.

You'll also need to pay attention to your weapon of choice as well for a clean kill - a blast with a shotgun will quickly downgrade your pelt's rating. Go with the varmint rifle, a scoped rifle or the bow and arrow, and aim for a one shot kill in the neck or heart. For more information, here's how to get Red Dead Redemption 2 perfect pelts.

6. Information is your greatest weapon

OK, fine. After a shotgun information is your greatest weapon. If you're the sort that likes to plan ahead, taking the time to study animals you see through your scope, binoculars, or close up, while you're busy on other missions really pays off. It adds them to the compendium which to some might be a charming way to log the wildlife of Red Dead Redemption, but for the avid hunter is a great guide on the best way to kill everything.

7. Make sure you stink

Wearing more scented lotion than a ten year-old Body Shop fanatic will give you a much needed edge when stalking any kind of prey. Without it you'll need to make sure you know which way the wind is blowing when trying to sneak up on any animals - jump into Dead Eye mode to see your body odor - with it's no doubt delightful stink splashed on you can get right up close to your next victim.

Does what it says on the tin, although you don't get to be too picky about what turns up. You can increase your chances of snagging the prey you want by making sure you're using the right bait in the right areas - those sketches of animals on the maps aren't just for decoration - and covering your own scent with lotion. Once you can craft it - grab the recipe from any fence - potent predator bait will help you snap rarer animals like the cougar.