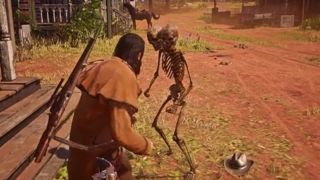 Red Dead Online players are experiencing a new undead nightmare, but it seems to be the work of hackers rather than Rockstar Games.

Multiple player reports have surfaced from Red Dead Online in the last few days that whisper of a new threat on the frontier: two-headed skeletons that want to fight. According to the reports, these skeletons drop into the world out nowhere and proceed to chase down players before pummeling them with their bony phalanges and metacarpals.

I got attacked by something I never expected from r/RedDeadOnline

The skeleton in this case seemed to be invulnerable, though fortunately it got spooked and ran as soon as the player drew a gun. It makes sense, since it would be twice as easy to get a headshot on them.

Another report even claims that the hacker was controlling a skeleton directly, along with some support from a buddy playing a robot. The west gets extra weird when you're playing on PC.

So far, most of the reports have emerged from the PC version of the game, and it all adds up to indicate that the skeletons are the work of hackers rather than an extremely early Halloween trick from Rockstar Games. Minor spoiler for the single-player campaign, but the two-headed skeleton already exists in the game as the remains of a carnival's star attraction who was tragically trapped and died after a wagon crash.

Of all the naughty things hackers could do to disrupt your game go, summoning hordes of the slap-happy undead is pretty minor. Still, it is 100-percent cheating, so hopefully Rockstar Games finds a way to end Red Dead Online's undead nightmare and restore the poor two-headed woman to her eternal rest soon.

If you prefer your creepy in-game surprises to be the work of the developers themselves, you may want to try leaving Zombie Army 4: Dead War paused on PS4.