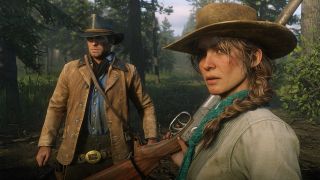 Rockstar has already achieved untold wealth and success with Red Dead Redemption 2, which has sold over 23 million copies since its release last October but Red Dead Online - the game's multiplayer component currently in beta on PS4 and Xbox One - sounds like it isn't quite achieving the same kind of results.

According to a new financial report from research firm SuperData, the beta's revenue (i.e. the money generated from Red Dead Online's microtransactions) dropped by 14% month-over-month in January, due to a decline in monthly active users. SuperData's report also states that GTA Online, the multiplayer component to 2013's GTA 5, is still making five times as much money for Rockstar compared to Red Dead Online, as its users are still investing heavily into that game's similarly structured microtransaction economy.

The question is whether this comparative inequity is an indicator of Red Dead Online's ongoing struggles, or merely another sign of GTA Online's continued popularity, as the five year old multiplayer experience is still enjoyed by millions of users across console and PC each and every day.

The Red Dead Online beta had a rocky launch in November last year, and is fairly devoid of content compared to GTA Online, but Rockstar has continued to furnish the experience out with hot fixes, rebalances, and new content, including the latest update to the game, which rolled out earlier this week.

Take-Two Interactive, Rockstar's owner, has made it clear that it needs Red Dead Online to generate revenue for the company well into the future, so this news must come as something of a disappointment. Still, there's always room for growth, and we'll see whether Rockstar can pull off another miracle by building up an active user base for its fledgling online experience. Stranger things have happened.

Rockstar might be struggling to find gold in them thar hills, but here's how you can make money fast in Red Dead Online right now.