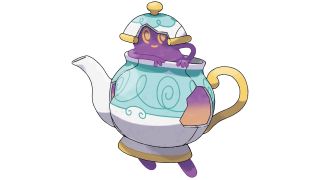 Caught a Sinistea in Pokemon Sword and Shield? You might want to see if it's an authentic Pokemon…

The desire to catch 'em all has never been stronger, but now you've got to be extra vigilant with what you do catch, because there's fake Pokemon afoot. Polygon reports that one of the most unabashedly British Pokemon, Polteageist, has a counterfeit version lurking about Galar. These Pokemon ain't loyal…

Polteageist evolves from Sinistea, and if you don't catch an authentic Sinistea, your Polteageist will be a counterfeit, as well. According to one of the Pokedex entries for the ghost-type Mons, "the teacup in which this Pokemon makes its home is a famous piece of antique tableware. Many forgeries are in circulation." Yup, that means you may have some knock-off tableware in your possession. The official guidebook refers to them as "Phony" and "Antique" forms.

Here's how you can tell if you've got an authentic Polteageist or Sinistea - check the bottom of the teacup (or teapot). The Pokemon website Serebii writes that most "standard forms" of these Pokemon are fake, and you'll be able to tell by the seal on the bottom of both. The authentic seal should be small and blue. You can flip your creature over in the Pokedex - press A to inspect details and then A again for "Motion/Cry" and you'll be able to move your Mon around freely. People are taking to social media to report that there's a lot of fakes out there, as in, most of them. Looks like for ever nine counterfeit Pokemon, there's one genuine version.

I hate myself for spending time on this but here’s the forged vs not forged difference of sinistea. Enjoy pic.twitter.com/N1uY3R3YlaNovember 16, 2019

You'll also be able to tell if you've got the real thing or a knockoff based on the evolution item you use to evolve it from Sinistea to Polteageist: Cracked Pots are fakes, Chipped Pots are real. So, technically, you won't have a counterfeit Pokemon, you'll have counterfeit tableware, as the ghost boy inside the teapot or teacup is 100% genuine, he's just got bad taste in antiques. There's also no actual difference in the Pokemon's stats or strengths between the counterfeit and the authentic, it's just a hilarious detail to keep you on your toes.

You'll also want to keep an eye out for "square Shinies." You can read up on what they are and how to catch them here. And our Nintendo Switch Black Friday deals are far from counterfeit.