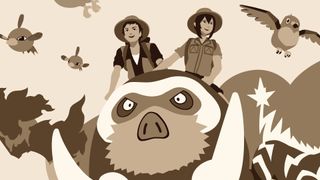 If you want the opportunity to be matchy matchy with a cool new shirt for you and your Pokemon Go trainer, you'll need to get thee to the Pokemon Go Safari Zone in March.

Developer Niantic has revealed some of the merchandise that visitors to the Safari Zone will be able to purchase once the event kicks off in St. Louis from March 27 to March 29. I wouldn't write about a mundane, run-of-the-mill Pokemon Go T-shirt, but this T-shirt comes with a code that you can use to unlock an in-game equivalent for your trainer. It is, in effect, a trans-dimensional T-shirt. Or maybe just a two-for-one deal if you're not feeling quite so science fictional about the whole thing.

The design depicts a pair of trainers in appropriate safari gear, riding into action on the back of a Mamoswine. They're either being led by or chasing after a Pikachu in an Indiana Jones hat and are flanked by all manner of other pocket monsters. You and your trainer will look great wearing it together, especially paired with some khaki shorts.

Once the Safari Zone kicks off, participants will be able to find Mankey, Unown S, Teddiursa, Snivy, and Ferroseed roaming throughout St. Louis' Tower Grove Park. Trainers can also catch a little Chatot, which is usually exclusive to the southern hemisphere, as a treat.

You can pick up tickets to the Pokemon Go Safari Zone in the game right now if you want to head off and catch some monsters - and more importantly, snag that matching T-shirt for yourself in your trainer - in the fine city of St. Louis.

Find even more to play in our guide to the best iPhone games.