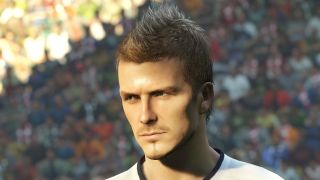 With EA focussed on its official World Cup game for the next month or so, it’ll be a few weeks before we receive on-the-record confirmation of FIFA 19. Props to Konami, then, for stealing a march on its enormo-walleted opponent and today announcing PES 2019, with a release date of 30 August.

That’s not the only manner in which PES is targeting its longstanding rival’s shinbones. Knowing that there’s no sports mode on earth that brings in the riches of Ultimate Team, Konami’s equivalent, MyClub, is getting a substantial overhaul. Card designs are said to be “revolutionary”, with the manner in which you build squads totally reconstructed – while the type of items available as the foundation of said squads are expanded to include High Performance Players, Legend Players, and Players Of The Week.

Still, MyClub vs Ultimate Team is only half the battle. Despite PES' often-exceptional attempts to emulate real football, many fans still cite licences, rather than on-pitch action, as their reason for choosing FIFA over PES. With that in mind, Konami’s commitment to adding more teams, kits and stadiums is a focal point of the announcement, with David Beckham – a notable absentee from FIFA 18’s ‘Icons’ list – fronting a special edition of the game. The exact content of that special edition is TBC, though it will include “the opportunity to unlock MyClub bonuses", presumably including Becks. Barcelona winger Philippe Coutinho will appear on the cover of the standard version.

For now, gameplay innovations have somewhat gimmicky names, but PES’ excellence in recent years should ensure that they’re more than back-of-the-box buzz-phrases. “Magic Moments” will see new skill traits and shooting mechanics create a wider variety of chances and goals; “Visible Fatigue” intends to impact player performance and behaviour without the need for an onscreen stamina gauge; and “Global Illumination” technology gives everything a graphical upgrade. On that note, snow makes its much-requested return, and grass textures and net physics have been improved.

All of which sounds promising. The next step in weighing up its chances for the 2018/19 season comes with the first opportunity to go hands-on, which usually occurs at (or shortly after) E3. Watch this space for our impressions as soon as we get access.

PES 2019 is released for PS4, Xbox One and PC on 30 August. Fancy something a little different from the big two? Then check out our list of the best 11 football games not called FIFA or PES.