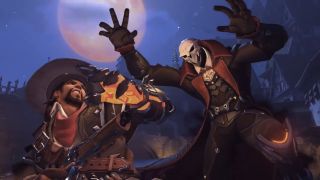 Any time a holiday approaches, Overwatch fans get antsy; any excuse for new character skins! Thankfully, players won't have to wait much longer before they'll see heroes like McCree, Reaper, and others dressed up in their most spook-tacular outfits for Overwatch Halloween Terror 2017. The special begins October 10, and will go until November 2.

The official Overwatch Twitter account has a suitably spooky poem and teaser to get you ready, short though both may be:

It looks like McCree will be getting a monster hunter / Van Helsing-inspired costume, which was briefly glimpsed in last year's digital "Junkenstein" comic. Reaper has also apparently gone the way of an undead bloodsucker, with a fancy cloak and cute little vampire fangs on his skull mask.

Unfortunately, there's not much more info about the event just yet. Obviously McCree and Reaper are getting skins, but who else? Sombra, Orisa, and Doomfist were all added after the first Halloween event so they're good candidates, but personally I'd like to see D. Va and Mei get something a bit more befitting the season this year as well.

I imagine there will also be emotes, sprays, and other cosmetics, but what I really hope for is something similar to the Junkrat's Revenge mode that debuted as part of Halloween Terror 2016. Four-person co-op against waves of computer-controlled enemies was surprisingly fun.

It would also be great if Blizzard followed its own example from the Summer Games 2017 event and made last year's skins available once again to those who missed out. I still want my witch Mercy, dang it!