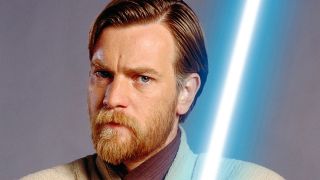 Rumors and a few limited reports were swirling Friday afternoon about Ewan McGregor leaving the Disney+ Obi-Wan Kenobi TV show, but sources at The Wrap have said those rumors are "totally inaccurate." A separate source with intimate knowledge of the situation echoed that sentiment when talking to GamesRadar.

Fortunately, it sounds like everything is moving along just fine with the Disney+ Obi-Wan Kenobi TV series. But for the sake of clarification, here's a bit of history on how the rumors picked up traction.

Discussing Film's parody Twitter account, DicsussingFilm, posted a satirical tweet on Wednesday that said McGregor had walked away from the series. It's possible that it's this tweet that was the source of all the confusion.

FandomWire was the first to report that Disney had canceled the Obi-Wan Kenobi series, citing exclusive sources. However, the story can't be found on the site's homepage and isn't being shared on the FandomWire Twitter account, which is unusual for an exclusive story, especially one of this magnitude. We Got This Covered picked up the story, citing FandomWire as their source. At the time of this story, the reports haven't been confirmed or shared by any other major outlet.

Despite relatively thin reporting on the cancelation, Twitter was alight Friday afternoon with concern that Disney had canceled the highly-anticipated Star Wars TV series, which would see Ewan McGregor as Obi-Wan Kenobi.

We're happy to share that for all the outcry they sparked, rumors of the Obi-Wan Kenobi TV series being canceled are unfounded. Now let's resume not-so-patiently awaiting any official developments about its plot, release date, and casting.

It's a relief to hear the Obi-Wan Kenobi TV series is right on track, as it's one of the most exciting new TV shows on the horizon. Check out the latest Disney Plus bundles.