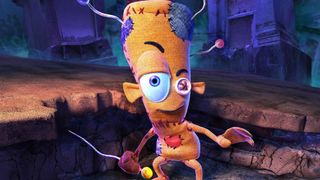 All the remasters and HD-ifications in the world can't prepare you for this: Original Xbox game Voodoo Vince is coming to Xbox One in 2017 with updated visuals and a 60fps framerate. I see some of you cheering while the rest of you are looking around confused. Allow me to explain.

Voodoo Vince was an Xbox-exclusive 3D platformer made during the golden years of the genre. Being a voodoo doll, Vince was able to solve puzzles and attack enemies by doing damage to himself, often in creative and hilarious ways. Even if you never played the original, you might recognize the name thanks to the current head of Xbox, Phil Spencer.

Spencer name-dropped Vince during a 2014 interview with Xbox spokesman Larry Hryb, calling it his favorite game that he'd worked on at Microsoft. "To me, games are experiences that you have with people, whether it's family or friends," he told Hryb. "[Voodoo Vince] is the first game my daughters and I finished together."