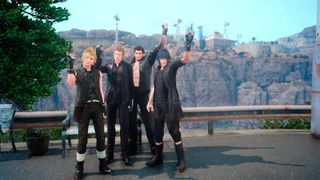 Xbox Game Pass subscribers will have new games to play starting tomorrow. For those playing on Xbox One, you’ll get two AAA games in Final Fantasy 15 and Wolfenstein: Youngblood. Next week, February 13, the library will also include Death Squared, an indie co-op puzzler starring a pair of robots.

Meanwhile, Xbox Game Pass for PC subscribers will get all three of its new games tomorrow, February 6. Like Xbox players, those on PC will gain access to Final Fantasy 15 and Wolfenstein: Youngblood, but a different indie in Death’s Gambit, a 2D action platformer with “deep RPG elements.”

Next week, subscribers on either platform will also get to take part in the closed beta for the upcoming Microsoft Game Studios multiplayer game, Bleeding Edge. Already in development when Microsoft acquired Ninja Theory, the colorful hero brawler will launch directly into Game Pass alongside its retail release on March 24. Those hoping to take part in the beta can do so between February 14-16, because nothing says romance like hacking and slashing through Valentine’s weekend.

Of course, the circle of life dictates that some games are leaving Game Pass as well. If you’re hoping to still try out Rage, Shadow of the Tomb Raider, The Jackbox Party Pack 2, Pumped BMX Pro, Rage, and Disney Epic Mickey 2: The Power of Two, you should do so soon. They will depart from the Game Pass library before March, though Microsoft has not said precisely when just yet. If you decide to buy them before they leave the service, you can do so with a 20% price reduction.

While games come and go, our list capturing the best of Xbox Game Pass is forever.