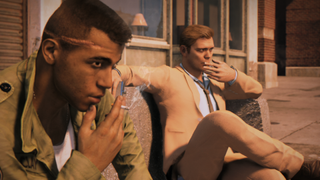 The quiet winter is coming to an end with tons of upcoming games on the horizon, and it sounds like Take-Two will add at least two more projects of its own to that list in the next few months.

The parent company of 2K Games, Rockstar, and Private Division took a conference call with analysts and investors yesterday in whih it laid out some of its future plans. One analyst asked about the status of two studios specifically: Hangar 13, which has gone quiet since releasing Mafia 3 in late 2016, and the new studio led by former Sledgehammer Games co-founder Michael Condrey (informally called 2K Silicon Valley).

"In regards to your question about Hangar 13 and also Michael Condrey's studio, I wish I could tell you more about what they're working on because it's very exciting, both the studios," Take-Two president Karl Slatoff said. "We're incredibly excited to have the teams at Hangar 13 led by [studio head Haden Blackman], and also Michael's yet to be named studio as well, working on new and exciting projects.

"As I said before, our pipeline is very diverse and is very large, and we're going to share with you more about that in the coming months. And these two projects are obviously part of that. So you can certainly expect that there will be games coming out of those studios. I wish I could tell you more about them, but stay tuned because they're very exciting, and we're thrilled to be in business with both of those folks and their entire teams. So stay tuned."

So according to Slatoff, we'll hear more about both Hangar 13 and Silicon Valley's unannounced projects in the months ahead. It feels odd to say it, but E3 2020 is only four months away...

We'll be waiting a little longer for at least one Take-Two production via Private Division: The Outer Worlds Switch release date was delayed in response to the coronavirus outbreak.