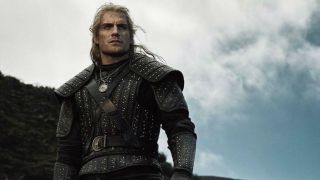 The Witcher Netflix series is slowly gearing up for its SDCC 2019 showing. Case in point: showrunner Lauren S. Hissrich has given us the first glimpse of Geralt's trusty steed, Roach. Not only is the apple-munching filly (yes, she's a girl!) carrying the weight of Henry Cavill's monster hunter on her back, but she's also hiding what looks like a hotly-debated second sword - one that was absent from the first round of Witcher Netflix series images.

As revealed on Hissrich's Twitter account with the lovably adorable caption "Everyone needs a best friend. World, meet Roach" (and, yes, horse emojis), Roach is seen guiding Geralt down a path away from a walled community.

But that's not all there is to that image. Look a little closer and you might just discover two very interesting tidbits, namely that the second sword is present. You can see the first resting on Geralt's back, while the hilt of the second sword (complete with Wolf Insignia) is teasingly poking out by the right of Roach's saddle. So the book truther vs. game Geralt arguments that have been raging over Twitter can be firmly put to bed.

There's also the small matter of Geralt's eyes. We now have a fuller look at his trademark Witcher peepers. In the games, they use him to track down beasts and hunt down ne'er-do-wells. Here, they may very well serve the same function.

So, when is the Netflix Witcher series SDCC panel? Your answer to that, and more, is here in our look at the game complete San Diego Comic-Con 2019 schedule.