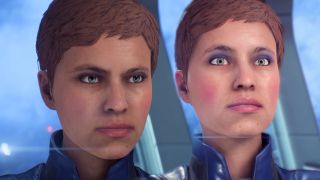 Eyes. Turns out they're pretty important for making a face look human and not like a creepy doll. The latest update for Mass Effect: Andromeda includes a tweak to the way the game renders eyes for both humans and asari (the latter of whom have human-looking eyes despite their head tentacles) and, man, just that little change makes a world of difference. The above side-by-side image was put together by Reddit user AC5L4T3R, and you can see a video comparison below.

Look at how much more natural the eyes appear shader! Update 1.05 also improves lip-sync and facial animations "during some conversations", according to the patch notes, so you'll hopefully notice an overall above-the-neck throughout the Andromeda galaxy.

Let's conclude with a nice picture from Reddit user autoportret of the default Sara Ryder's improved countenance. She'd attracted a bit of a reputation for looking off, so it's encouraging to see her looking a bit more put together. Sweet Negan cosplay, btw.

BioWare says it has at least two months worth of fixes and tweaks planned for the game in response to player feedback. Check out our Mass Effect: Andromeda review to see what we think of the original version.