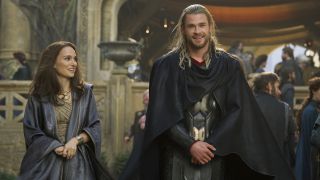 The romances in Marvel Studios movies haven’t lasted very long, have they? Well, unfortunately there’s some bad news for fans of the relationship between Chris Hemsworth’s Thor and Natalie Portman’s Jane Foster, and it’s a small spoiler for Thor: Ragnarok: in that film, the couple has broken up.

Entertainment Weekly brings word of the split, confirming it by speaking directly with Hemsworth and getting the following response: “[Thor’s] off exploring the universe, still trying to police it and control the mayhem,” says Hemsworth. “But he’s certainly enjoying being a drifter, being a solo cowboy out there.” A solo cowboy, eh? Well, that at least sounds like it could be fun, which is not something that can be said about nearly anything that happened in the dismal Thor: The Dark World.

But then again, perhaps Thor won’t be a “solo cowboy” for long. In the same interview, Marvel Studios president Kevin Feige mentioned Tessa Thompson’s new character Valkyrie (pictured below), and though it wasn’t specifically stated that she’ll be Thor’s new love interest in the film, it certainly seems like that’s a strong possibility. “We wanted Thor to encounter somebody that was near his equal and that his relationship with Jane may have evolved in unexpected ways in between The Dark World and Ragnarok and we wanted to pit him against a character who was much more his equal and in many ways his superior,” he said. “Valkyrie is trying to not embrace any sort of Asgardian heritage that she has. Thor thinks maybe that will create a bond between them and, on the contrary, she wants to forget it all entirely.” Interesting… we’ll keep our eyes peeled for any sparks to fly between those two.

Take a look at a brief history of the long-term romantic pairings in the MCU. In addition to Thor and Jane breaking up, Tony Stark and Pepper Potts seemed to have fallen by the wayside by the time Civil War rolled around, Steve Rogers and Peggy Carter were separated by decades while Captain America was on ice, and even Black Widow and Bruce Banner only had a brief moment to themselves before Banner shot himself into space (where he’ll next encounter Thor in Ragnarok). This cinematic universe just doesn’t seem to be interested in romance - there are too many bad guys to defeat and too many worlds to save. It’s gotta be hard to keep the passion alive when Thanos is looming and threatening to destroy your entire existence.

Oh well. At least the subtextual romance between Steve Rogers and Bucky Barnes will keep tumblr users happy until the next movie comes along.

Directed by Taika Waititi and starring Chris Hemsworth, Tom Hiddleston, Tessa Thompson, Jeff Goldblum, and Cate Blanchett, Thor: Ragnarok will be released in UK cinemas on October 27, 2017 before opening in US theatres on November 3, 2017.