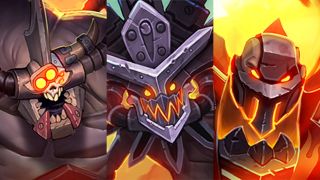 Hot off the heels of its Warcraft-themed Echoes of Alterac event, Blizzard's Heroes of the Storm is going post-apocalyptic for its upcoming "Warchrome Wastes" event. Specifically, the MOBA will be drawing on Mad Max for inspiration, with skins like Dominus Vile Azmodan, Diesel Speaker Nazeebo, and Roadraider Raynor.

Dominus Vile Azmodan seems to take inspiration largely from Fury Road's Immortan Joe, while Roadraider Raynor looks like a mix between The Road Warrior himself and Marvel's Ghost Rider. And Nazeebo, well... I don't know that there's a good comparison for him, but a giant voodoo mask made out of truck party, flame-spouting exhaust pipes, and a belt made from a stoplight sure looks metal as hell.

Carrying heroes into battle is the new Helldorado mount, a chopper-style motorcycle, which features ludicrously-large exhaust pipes, a flaming front tire, and an enormous cow skull with a gatling gun sticking out of its mouth mounted on the handlebars.

The event also marks the release of gameplay reworks for Azmodan and Raynor, two of the game's earliest characters. These reworks aim to put a bit more manual control in players' hands (by turning Raynor's self-heal from a passive into an active ability, for example), and you can see them in action below:

The Warchrome Wastes event is now available on the Heroes of the Storm PTR and should hit live servers in about a week.