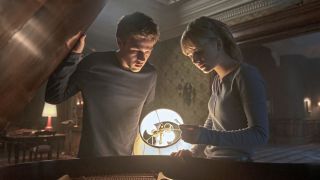 Netflix has a strong recent history of successfully adapting comic-books to the small screen – just look at Riverdale, The Chilling Adventures of Sabrina, and Umbrella Academy. Next comes Locke and Key, the horror-infused series written by Joe Hill and illustrated by Gabriel Rodriguez.

The story centres on Nina Locke and her three children, who – after Nina's husband Rendell is murdered by a former student called Sam Lesser – move back to Rendell's ancestral home, Keyhouse in Lovecraft, Massachusetts. There, the youngest child, Bode, begins to find magical keys, and a supernatural presence is soon found trapped in the well house on the property. Bode’s older brother, Ty, and sister, Kinsey, find that the mysterious keys have powers, and the three siblings work together to fend off attacks from the well house woman, who also happens to have a historic connection to their family and seeks the most dangerous key of them all: the Omega Key.

There are around 18 keys in the series and they all offer the user different powers. The Ghost Key separates a person's spirit from their body when they walk through a specific door in Keyhouse; the Anywhere Key allows the holder to unlock a door to any place they can visualise; and the Head Key allows one to look inside their own mind and to see old memories as well as the personification of their emotions, like fear. As the comic books progress, more keys are found and wielded by the Locke kids though, interestingly, adults are not completely aware of their powers even when they are used right in front of them. (If that all sounds like a forgotten Stephen King novel, then you won't be surprised to find that writer Joe Hill is the acclaimed horror novelist's son.)

The first issue of the Locke and Key comic book series was published in 2008 as part of a six-issue arc called “Welcome to Lovecraft,” and it sold out within a day. The series went on to run for a total of six series, offering a complete three-act story.

However, the saga doesn’t play out in chronological order – as the series progresses, we learn about the origins of the magical keys and see the harrowing events that led to Rendell Locke’s murder.

The series has won several awards since it was first published, taking home the British Fantasy Award for Best Comic or Graphic Novel in 2009 and 2012, while Joe Hill won the Eisner Award for Best Writer in 2011. It’s no wonder then that Hollywood sought to adapt the hugely popular comic series for the screen, although that journey has been a very bumpy one.

Locke and Key's journey to the small screen

The film and TV rights for Lock and Key were first acquired by Dimension Films in 2008, the production company behind several big horror franchises – including Hellraiser, Scream, and Scary Movie – that was formed as a genre branch of The Weinstein Company. After two years, Dimension lost the adaptation rights to Dreamworks, who enlisted Alex Kurtzman (now overseer of the Star Trek franchise) and Roberto Orci to develop and produce the project as a TV series instead of a film franchise, with 20th Century Fox TV to release and Steven Spielberg set to serve as a producer.

The pilot episode aired at the San Diego Comic-Con in 2011 and earned critical acclaim. "The cast are what really made Locke and Key work for me," wrote Newsarama's Jill Pantozzi. "For the most part, Locke and Key was a well-done pilot. Some aspects were made extremely well and very few fell short in my eyes. I fear perhaps that it was not commercial enough for FOX. I can’t say it was too weird, especially when you consider the success of something like Fringe on the same channel, but it was probably too big a leap for them into the fantasy realm."

Unfortunately, by the premier, the studio had already passed on taking it to series in favour of J.J. Abrams’ Alcatraz. Fox instead tried to sell the show off to another network, but with no luck and rising costs – $10 million had already been spent – they called it quits. In 2014, Kurtzman and Orci announced at SDCC that they were working with Universal to make a Locke and Key film franchise, but that didn’t pan out either.

Fast forward a few years to 2017 and Hulu greenlit its own Locke and Key pilot with Lost co-creator Carlton Cuse and Lindsey Springer serving as producers, and with Joe Hill penning the script. Scott Derrickson (Doctor Strange) was meant to direct the episode but was soon replaced by Andy Muschietti (It: Chapter One and Two) after a scheduling conflict with TNT’s Snowpiercer series. Frances O'Connor was cast as Nina, with It's Jackson Robert Scott set to play Bode, Jack Mulhern playing Tyler, and Megan Charpentier as Kinsey. However, Samantha Mathis said in 2018, after she filmed the pilot, Hulu had passed on this version too.

Locke and Key lands at Netflix

Good and bad news followed. First, the bad: Muschietti bowed out of the series to concentrate on the second It movie. The good? The show was finally – finally – given a series order by Netflix. The entire case (minus Jackson Robert Scott) was replaced, and The Haunting of Hill House writer Meredith Averill brought on board to serve as showrunner alongside Cuse and Aron Eli Coleite.

However, this won't be a faithful adaptation: after watching the first few episodes, it's clear the visceral bloody and violent content of the comics has been removed in order to cater for a more family-friendly audience. The structure and narrative of the comic series have also been untangled and rearranged to get the plot moving quicker, expand the backstories and motivations of certain characters and introduce supporting ones earlier. (More importantly, Nina has a redheaded, suburban mum appearance, rather than being the raven-haired hot mama from the page.)

Season one could potentially wrap up all three acts of the comic-books in order for future seasons to continue with new material – though Cuse and Averill confirmed to The Hollywood Reporter that a multi-season plan has been devised and they are already working on scripts for a second season.

Clearly, Netflix is trying to replicate the success it has achieved with Stranger Things, and Locke and Key certainly has the potential to do that.

Wondering what else is new on Netflix? then check out all the new Netflix movies and shows you can watch right now.