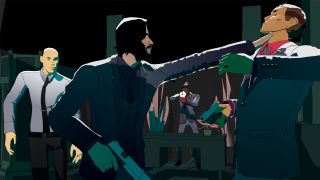 It's official; 2019 is the year of our lord Keanu Reeves. Not only is the actor breaking the internet with the likes of Cyberpunk 2077 and Toy Story 4, but his infamous Baba Yaga assassin is starring in his own game with John Wick Hex, the upcoming strategy title from famed indie developer Mike Bithell (Thomas Was Alone, Volume).

Hex is technically a prequel to its cinematic counterparts but, given that John Wick 3 introduced new characters to the Wick-verse earlier this year (most notably with Halle Berry's ass-kicking confidante, Sofia), some Keanu die-hards are likely wondering whether we'll be getting play as anyone else from the movies once the game releases.

Speaking at this year's Develop conference in Brighton, UK, Bithell explained why Hex will be sticking with John as the sole protagonist for the entire adventure, describing it as "essentially X-COM but with a single playable character", but didn't rule out introducing new squad-based elements in potential future collaborations with Lionsgate Entertainment.

John Wick Hex is a prequel to the movies, he doesn't have a dog, and you can yeet his gun at enemies

"So we actually started production on the game before the third movie was written," Bithell said, admitting that "When I read the script for the movie about a year ago, it was surprise that [Halle Berry's character] was in there, but that was cool. For me, the focus of the John Wick fantasy is about directness and speed, and by removing the squad side of it we sped up the game."

"For sure, it's a conversation we've had throughout, and reading the script - especially Halle and Keanu's fight scene in Casablanca is amazing - that was definitely something that we all looked and said 'Wow that should be in the game!' It's not going to be in this one... maybe if we get another chance we might play with some of those things, but my biggest fear about the squad stuff is that it would slow down the game, and with John Wick you almost want to be playing in real time."

John Wick Hex has yet to receive a confirmed release date, nor do we know if Keanu Reeves himself will be lending his dulcet tones to the video game itself, but Bithell teased at the panel that there's more special announcements to come before the title finally lands on PC in the near future. Two words; doggo companions.

Learn about more of the biggest E3 2019 games to come out of the expo this year, or watch the video below for a guide to everything else out this week.