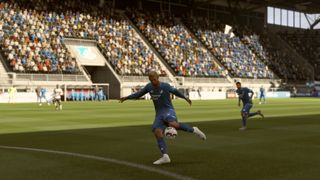 As the young Brazilian is on the brink of a move to the Premier League, we've got all of the Joelinton FIFA 19 stats and his Football Manager evaluation to see how good he really is. First off though, some people may not have even heard of the player; Joelinton is a 22-year-old striker currently playing for TSG Hoffenheim in the Bundesliga and after hitting double figures with his goals in competitive games last season, people are wondering if the FIFA 19 and Football Manager 2019 stats for Joelinton can give an indication as to how good the player will become, ahead of his proposed move to Newcastle United.

When you take a look at Joelinton's base stats in Kick Off mode in FIFA 19, you're greeted with a 77 overall player; a huge upgrade compared to the 69 rating he had at the start of the game. Taking a look at his stats and one thing stands out; strength. With 85 strength and a height of 6'1", Joelinton is a monster in the air and when keeping hold of the ball. Other stand out stats include his 78 finishing, shot power, and dribbling, plus with 77 ball control, he's brilliant at playing the role of a target man.

Avid Ultimate Team players among you may remember the FUT Future Stars promotion around December, which Joelinton was a part of. These cards were meant to highlight the players' potential for the future, and Joelinton boasts an impressive 87 pace, 85 dribbling, 85 shooting, and 84 physicals. His strength has soared to a ridiculous 90, along with his attacking positioning. If this is accurate, then Newcastle are definitely bidding for a future star.

When it comes to Football Manager 2019, the current Joelinton has an impressive 17 work rate, aggression, and balance, followed by 16 pace, strength, and bravery. At the other end of the scale, he's only got free kicks of 8, along with a first touch and positioning of 9. For a striker, those are definitely areas to work on, but nothing too shocking, especially considering he's only 22.

In the Football Manager future, for us he moved to Bayer Leverkusen in the 2019/20 season for almost £16m, didn't feature much for them, before going on loan to Besiktas, then moving to Lokomotiv Moscow for £6.25m. While in Russia, he's had sporadic appearances, only managing a maximum of 20 per season, but when he has played, he's scored a healthy number of goals to have consistent 7+ ratings for five years on the trot. It doesn't look like he's maximised his true potential, but perhaps a move to the Premier League in real life could be where he shines.

Here are all of the FIFA 20 icons we want to see in the next game, from David Beckham to Ferenc Puskas.