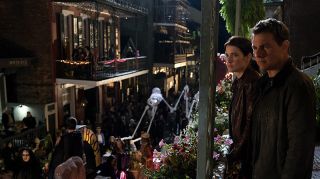 Paramount have officially unveiled the first full trailer for Jack Reacher: Never Go Back, and it features some more footage of Tom Cruise punching people, shooting people, and generally being a badass. If that's the sort of thing you enjoy, hit play below.

Christopher McQuarrie's Jack Reacher was a modest hit back in 2012, and while the writer-director then went on to collaborate with Tom Cruise again in last year's terrific Mission: Impossible - Rogue Nation, he won't be back for the sequel. Instead, Edward Zwick - who directed Cruise in The Last Samurai - called the shots on Jack Reacher: Never Go Back, and the first trailer (of sorts) for the film has landed online.

This was a strange way to reveal the first footage from Jack Reacher 2; instead of just a straight up trailer, the clip is interspersed with interview sound bites of Cobie Smulders explaining the movie and an equally unnecessary voiceover from an ET presenter.

Thankfully the footage looks promising, with Smulders' Major Susan Turner teaming up with Cruise's former military police officer to clear her name. Cue fistfights, prison breaks, and a whole lot of Reacher kicking ass. That sounds like a fun, albeit relatively straightforward actioner, so here's hoping the final film does a little more to distinguish itself from similar fare when it arrives in cinemas later this year.