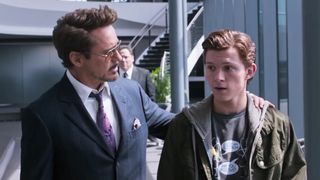 Spider-Man: Homecoming, all told, was a pretty intimate, small-scope story of Peter Parker getting to grips with webs, wall-crawling, and what it’s like to suffer through high school. But its sequel, Spider-Man: Homecoming 2, might be going in another direction – and could be setting up a villainous team so bad Spidey might need some backup from Earth’s Mightiest Heroes…

Here’s what we know for sure: Variety is reporting that Mysterio is all-but-confirmed for the sequel, as is the returning Michael Keaton as Vulture. When coupled with the post-credits scene in Homecoming (y’know: the one with Scorpion in prison with Vulture) that adds up to one thing and one thing only: the Sinister Six.

First, a history lesson. The Sinister Six, if you know your comics, have many different forms. Essentially, they boil down to a great big supervillain group united in their goal to rid the Big Apple from everyone’s favourite neighbourhood Spider-Man. All of the villains mentioned so far – Scorpion, Vulture, Mysterio – have all played a role in the iconic, terrifying team.

So, a lot of the puzzle pieces are falling into place. That may only be just the beginning. My math isn’t always great, but there’s still three spots to potentially fill (if the MCU is going down that road). That route would surely lead to a big set-up not too dissimilar to the one we saw leading up to The Avengers in 2012, just with a nefarious twist. Expect the likes of Doctor Octopus, Electro, and Sandman to come knocking sooner rather than later.

Homecoming 2 bringing half of the Sinister Six together with the remaining half being hoovered up across other Homecoming and MCU movies to form a supergroup the likes of which hasn’t been seen on the silver screen? Yes, please. Heck, I’d be happy with the Sinister Six forming the crux of a possible Avengers 5 movie – now that Spidey is an official Avenger, of course. It looks like Spider-Man’s Homecoming roadmap has been charted for the next decade. Excited? You should be.

For now, that's a pipe dream. Here's all of the (real) new Marvel movies set up for the next few years.