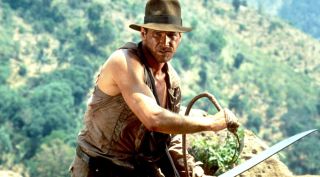 Several studios are currently looking to start their own movie universes, but Disney already have their hands on the two most successful worlds in cinema today - Star Wars and Marvel. During a panel called 'The Art of Storytelling' at Star Wars Celebration Europe over the weekend (via Collider), ILM President Lynwen Brennan made a comment that suggested Disney may be planning another interconnected universe, this time revolving around Indiana Jones:

"Kiri [Hart] and her group have mapped out a story and timeline across multiple platforms many years in advance, many exhausting years in advance. … We have a great honor to have responsibility for, so we want to be really careful with that. Not only for Star Wars but with Indiana Jones, which we’re all really excited about as well".

A few months ago it was announced that Indiana Jones 5 is coming to cinemas in 2019, but this comment implies that there are plans afoot for the character beyond that, and not just on film. I could see that strategy working well for video games, but given that Harrison Ford is 74 years old the role will probably have to be recast in a couple years. Would that mean that prequels are in Indy's future? Nothing has been confirmed yet, but it sounds like the Indiana Jones franchise will continue long after Ford hangs up his fedora.

Directed by Steven Spielberg and starring Harrison Ford, the fifth Indiana Jones film is currently set to debut on July 19, 2019.