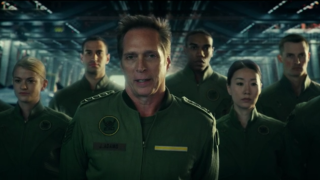 Ever wondered what it would be like to live in the Independence Day universe? Sure, the threat of annihilation by an alien force would suck, but you'd get to see cool recruitment videos for Earth Space Defense, the military branch created to defend our planet from said extraterrestrials. Like this one:

I like the vibe Independence Day: Resurgence is going for here, even if it does call to mind the more exaggerated propaganda from something like Starship Troopers (another sci-fi war movie and thing you must watch). I gotta say though, "united we survive" is not nearly as catchy to me as "service guarantees citizenship."

Regardless of who said it better, we'll get to see plenty of stuff blow up when Independence Day: Resurgence hits theaters next month.