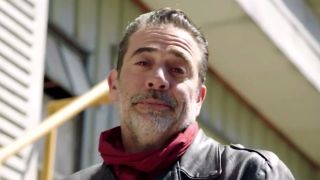 The Walking Dead's debut on AMC was a big moment in television history. Seven seasons later, it continues to be a show full of big moments - like its upcoming 100th episode, for example. To celebrate the triple-digit milestone, the cast has come together for a special thank you video wherein they recount the love and support of fans and how their journeys started:

It's kind of hard to believe that Chandler Riggs, who plays Coouhhrrl, was only 10 when the show started. Likewise, I didn't even know that Alanna Masterson (Tara) was originally supposed to be killed off just three episodes into her tenure, or that Melissa McBride (Carol) thought she was going to bite the big one within the first season.

Norman Reedus starts the video by promising more behind-the-scenes clips to come. Along with The Walking Dead season 8 trailer from San Diego Comic Con, there should be plenty to keep fans salivating like a zombie on the prowl for human flesh.