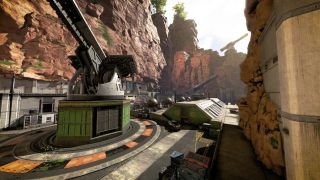 It's official. Respawn Entertainment (Titanfall 2, Star Wars: Jedi Fallen Order) is making a battle royale game called Apex Legends, and the studio will be revealing all in a live stream later today. While no details have yet to be confirmed outright, the latest rumours and whispers suggest Apex Legends is set in the Titanfall universe, will be free to play on PC and console, features squad based gameplay that feels like a cross between Overwatch and Call of Duty: Black Ops 4, and could be releasing very, very shortly.

The "teaser stream" has already begun on Twitch, and seems to be switching between real time shots of various locations set in Apex Legends, segmented interstitially by brief clips of characters from the game itself, with the full reveal coming shortly after that. Below, you'll find all the other information you need to know about Apex Legends before the big announcement arrives, including how and where to watch it.

When can I watch the Apex Legends reveal event?

Looks like everything is unlocked now? Fun.So, if you like Respawn, our games or even me, you should tune in tomorrow. Our stream starts at 8am pt and we’ll tell you everything about Apex Legends. Everything. https://t.co/P0Svi1h5VSFebruary 4, 2019

The Apex Legends teaser stream has already begun but, according to Zampella, the current show is just the beginning of the announcement, which will then culminate with a "full reveal" at 12PM PST/3PM ET/8PM GMT, at which point those on the west coast will apparently want to "fake food poisoning at lunch and go home early." Hmmm....

Where can I watch the Apex Legends reveal event?

I want to clarify, 8am pst starts the @PlayApex teaser stream. It’s super cool, but it leads up to the full reveal of everything at noon. So you probably don’t have to call in sick, just fake food poisoning at lunch and go home early.https://t.co/LsOnVwY35BFebruary 4, 2019

Apex Legends has just set up its own Twitch account for you to watch the stream on at twitch.tv/playapex. You can also watch the ongoing stream on YouTube if your device doesn't like Twitch, though there's currently no in-browser video for those who are finding it hard to watch on any other platform. Sorry!

How can I watch the Apex Legends reveal event?

If you don't have access to the internet or a working device at the time of the live stream, fear not. We'll have full coverage of Apex Legends here at GamesRadar as soon as Respawn lifts the lid on its battle royale title. We can even tell you that we've already played some of it, and have a lot to say about we think, so stay tuned!

Otherwise, you can subscribe to the Electronic Arts YouTube channel to watch all the newly released Apex Legends trailers and gameplay soon after they go live on the stream, in case you aren't able to catch them during the show itself.

What will be in the Apex Legends reveal event?

Zampella has promised that Respawn plans to tell us "everything" about Apex Legends during the show, so you can expect to see trailers, gameplay, chats with the development team at more throughout the entire stream.

Respawn will probably confirm or deny all those rumours about the game being free to play, with concrete details about its release schedule and pricing structure anticipated to be part of the presentation. In essence, you'll learn everything you need to about Apex Legends over the course of a few hours, so don't miss it!

While we all eagerly prepare for the titan fall of Apex: Legends, here's the best battle royale games like Fortnite to play in the mean time.