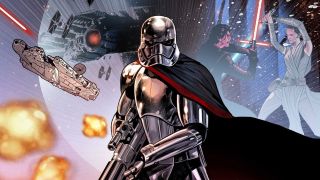 Want to know what happened in a galaxy far, far away between the events of The Force Awakens and The Last Jedi? Especially if you're a fan of a certain chrome-domed Stormtrooper? You'll want to head to your local comic shop in September to pick up a copy of Star Wars: Captain Phasma.

The four-part mini-series will help bridge the gaps between Star Wars 7 and 8, focusing on just how the crap a Stormtrooper many assumed was stuck in a trash compactor escaped the destruction of Starkiller Base. There will likely be some hints as to other goings-on in the ranks of the Resistance and First Order as well, so I wouldn't go thinking this comic will just be about Phasma, despite the title.

Keep an eye our Star Wars Celebration Orlando 2017 hub page for more news from the event as it happens.