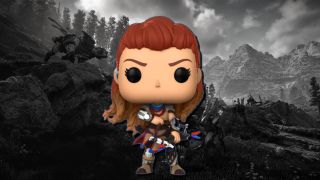 Funko Pops are always irresistible - those big black eyes, those pleasingly rotund heads - but the latest batch will really make you want to clear some shelf space. Bow-twanging hero Aloy, flirty fighter Erend, and their enemies from the PlayStation 4 exclusive Horizon Zero Dawn will be available in October, just ahead of the game's DLC, The Frozen Wilds, in November.

In case you missed out on the hype when the game was first released, it stars outcast Aloy who is surprisingly chill about the whole 'being shunned for her entire life' thing once it turns out the tribe needs her help. Help which involves using her magic Bluetooth headset to uncover secrets and fight massive metal monsters. A woman's work is never done.

She's joined in vinyl form by Erend, a Vanguard of the macho, heavy-drinking Oseram tribe. He's a bit creepy at first with Aloy, but you quickly grow fond of the mustachioed lout.

The mechanical Watchers are the cannon (or arrow) fodder of the Horizon Zero Dawn world, sticking their long necks into your business at every opportunity. This figure comes in two flavors: the calm blue and the on-alert yellow, which will only be available at Best Buy stores.

Finally there's the (boo hiss) Eclipse Cultist, representing for the bad guys in this post-apocalyptic adventure. Intent on using the machines of the world as a genocidal hit squad, the only thing in the cultists' favor is their on-point accessorizing skills.

Herman Hulst, managing director of the studio behind the game, clearly approves.