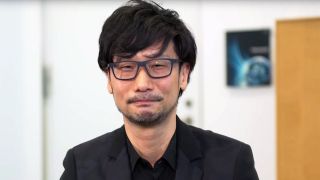 There's no way that Death Stranding is anywhere close to finished. A surprise trailer at E3 revealed auteur game director Hideo Kojima's first original project after decades of Metal Gear titles, and it's as inscrutably Kojima as they come - a bizarre melange of sci-fi grit and art house strangeness. It's also, considering Kojima's own recent history, years from being an actual, real video game that people can play. And yet, Kojima's getting that hype train chugging along as if it were scheduled to arrive this holiday season, and it's getting a bit ridiculous.

In a way, I don't really blame him for wanting to talk to anyone and everyone who will listen. He was virtually radio silent both with the public and the press ever since the initial report back in March of 2015 that Konami was shutting Kojima Productions down after the completion of Metal Gear Solid 5: The Phantom Pain, and his disappearance from the general gaming landscape didn't go unnoticed. This is a guy who loves to make podcasts and videos where he discusses game development and the number of times he's seen Mad Max: Fury Road in theaters in equal measure, and for all of that to just dry up almost instantly comes with no small amount of whiplash. He wasn't at the preview event at his own LA studio; he wasn't able to demo his game at E3; and he couldn't even accept his own award at the VGAs in December. You could feel his absence.

All of that changed on December 15, 2015. Kojima's employment contract with Konami had expired, and what felt like minutes later, Sony released a video on YouTube announcing a partnership with the auteur developer. Kojima Productions' website launched, complete with a sick logo, a detailed mission statement, a handful of job listings, and a small FAQ. Oh, and a store page, where you can spend about $60 USD on a collection of Kojima Productions-branded coffee mugs, shirts, and stickers. Strange to have a bundle of merch available right off the bat without any actual game to talk about, but whatever. It's Kojima - he's got a huge fan base, he understands the value of branding, the logo looks cool, and people are going to want that.

After spending a year cooped up at Konami headquarters not being allowed to talk to pretty much anyone (save for the rare tweet involving some hot new record he's listening to or a picture of whatever he's having for breakfast) he was finally able to speak about the new game he's working on with the rest of his crew at a newly independent Kojima Productions. As time went on, more and more details dripped out of the studio, through interviews with Kojima, or his personal Twitter account - but no one was sure exactly what anything was referring to.

OK, so there's a guy named Ludens, and he's hanging out in a space suit. Here's an image of him with his helmet on; here's one with it off. Here: a breakdown of the company's philosophical approach to making video games - with a delightfully off-kilter Kojima touch. Here: a little background on the little space dude via a handful of tweets. In the months leading up to E3, speculation ran rampant: Is this just an extended profile on Ludens the Logoman, or is this dude going to be in the game? Answers to these questions came piecemeal over the course of several months (yes and no, respectively), and details about what Kojima's next project is or how it will play - revealed as Death Stranding at E3 - are ridiculously scant.

They're scant because of course they are. Kojima just left Konami and he's in the process of building a studio. Video games (especially ones with deep and highly detailed systems like the ones Kojima is known for) take time. Kojima Production's website is looking for a plethora of artists, programmers, game designers, and more, so whatever ideas Kojima is kicking around that noggin of his are in the very, very early stages of production. All of Kojima's answers about Death Stranding are vague and nebulous because nothing's been designed yet. By Kojima's own admission, there's no script. Hell, there's not even really a story yet; just a jumble of ideas and a sort of mood trailer created by KojiPro for E3 that will probably be a scene in the final game (but also probably not because game design is a fluid, constantly changing process). Kojima hasn't even decided on an engine yet.

And yet the interviews continue to come. Geoff Keighley spoke with Kojima at E3 2016, spending 15 minutes talking about not much of anything before inexplicably turning into an infomercial for Kojima's aforementioned merch bundle. Keighley did the same at San Diego Comic Con, only this time it was almost an hour long, featured a full run-down of the backstory of the Kojima Productions' Ludens, a reveal of the logo trailer, and then, once again, inexplicably turned into an infomercial for Ludens action figures (which you'll be able to purchase soon, of course).

(Also, did you know it's Kojima in the suit? Important!)

These chats have amounted to little more than a handful of infinitesimally small nuggets of info about a game that's currently undergoing the part of development where the most radical changes are expected to happen - because nothing is set in stone yet. "The genre is action," Hideo Kojima tells Famitsu in a recent interview - a single, insignificant detail of a game with no context, because none is given. Also, please buy this tumbler emblazoned with our logo - it can store both hot and cold beverages.

Interestingly, Kojima's absence during the last year of Metal Gear Solid 5's development only added to its mystique, both in positive and negative ways. (The mystery was great, but the behind-the-scenes drama between Kojima and Konami hung like a pall over the proceedings) Conversely, by showing up every five minutes to hawk plastic toys and not tell us the main character's name, Kojima is destroying any remaining interest in ever watching an interview with him again until the game is on store shelves a decade from now.

Kojima should have released that Death Stranding trailer, given himself E3 to talk about it, then disappeared completely for the next year or two. Let the weirdness of that Death Stranding trailer simmer. Let fans theorize about it endlessly on reddit. Let people fill their own imagination with what the meaning behind its bizarre imagery could be. Meanwhile, he should devote himself wholly to getting the game to a point where he can start to get that hype train moving for real.

But maybe he can't do that. Maybe the reality of his partnership with Sony requires him to make these sorts of appearances; maybe the only way he can fund the additional costs of his studio is by making such a big deal about the logo and all the stuff you can buy around it; or maybe he feels like if he disappears again so soon that no one will care about him when he comes back. There could be a number of reasons why he's making all these tiny, currently meaningless statements that are completely out of his hands.

But if he's able to control the message and the frequency of his appearances, he should take a break from the public spotlight for a bit - or, at the very least, stop focusing so much on talking up a game that barely even exists. Let us wonder what the hell Death Stranding is going to be for a while, and come back in about a year or two with some concrete details (maybe even some actual gameplay footage) and really surprise the pants off of us in the way that only Kojima knows how to do. We'll be here, anxiously awaiting his return.