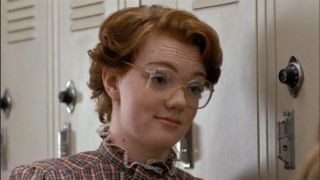 Stranger Things season 2 is still largely a mystery, which is fitting for a show about supernatural happenings inspired by the works of Stephen King. But as we draw closer to its October 27 premiere date, the show's creatives are willing to talk more about how they've approached this sequel of a season. Speaking to TVLine at the 2017 Emmys, showrunners Matt and Ross Duffer gave a few hints regarding what the season holds for Eleven and Barb.

"I will say that I think that [Eleven's] journey this season is very different than what people are going to expect," Ross Duffer began. "You know, we knew Millie [Bobby Brown] was good when we cast her, but she blew us away just like everyone else in season 1 so we really wanted to put her on an emotional rollercoaster this year. She knocks it out of the park."

"She's going through adolescence, and she's got powers. That's an interesting combination," Matt Duffer chimed in. "But it was fun. It was fun to write for Millie."

TVLine also asked the brothers how it would handle the much-requested 'justice for Barb.' While the Duffers reiterated that Barb won't be showing up at all (she's dead, and there won't be any flashbacks), but "her spirit lives on," according to Ross. "She left a hole with her family and Nancy too. The Byers got Will back, but [the Hollands] did not get their daughter back. So we see the repercussions of that."

Now, if we could just get some answers about this season's new monster in the sky...