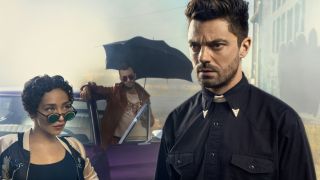 These are hard days for a preacher man. Having acquired the near all-powerful 'Word of God' the Reverend Jesse Custer (as played by Dominic Cooper) has the ability to make others follow his commands. But it’s a gift that’s brought him as much trouble as it has good. So with his hard-nosed ex Tulip (newly minted Oscar nominee Ruth Negga) and his best friend, the Irish vampire Cassidy (Joe Gilgun), he takes to the road in the first season of Preacher, on a mission to – quite literally – find the Almighty.

In hot pursuit, however, is the Saint of Killers (Graham McTavish), an invulnerable gunslinger tasked by God’s angels with stopping Jesse at all costs. And so, in year two, fans will find out what happens when an unstoppable force catches up with an immovable object. Blood and laughs are expected in equal measure, as fans of the Garth Ennis-penned comic on which the show is based have come to expect.

“The first episode,” Gilgun tells GR+'s sister publication SFX magazine on the show’s New Orleans set, “really lures you into believing they’re off on this big adventure and everything’s going to be great. Well, the reality is that’s just not the case.”

According to Negga, wearing Tulip’s denim and curls, we catch up with the group “...in a car, doing some really bad singing. Generally that’s how you find them at the start of their road trip. But they encounter a bad, bad man who’s done some bad, bad things. It’s the start of this cat-and-mice game between us and the Saint of Killers. Cassidy and Tulip are expecting to go off on an idealised movie road trip with their bezzies, and it ends up being kind of the opposite of fun and frolics.”

In chronicling their life on the road, season 2, says Cooper, will adhere more closely to the comic than the extended prologue of season 1. “It feels more part of what the comic’s essence is,” says the actor, garbed in Jesse’s trademark black outfit and silver-studded collars. “They were very clever in establishing something for a new audience. But now if you look at the imagery of the comic and you see the journey and how it unfolds, it feels much more like we’re part of that now.

“There’s a new sense of purpose,” he says, “that slowly reveals itself to be very wrong and goes very quickly downhill. The wheels just start to fall off of what seems on the surface to be a great group of friends who are going to help one another out. They’re people who are struggling with all their own demons that we watch just turn into a boiling cesspit of emotions and failings. That’s what’s gonna be really exciting.”

“We don’t have a town,” adds Negga, “so there’s no pressure from other characters. This is essentially a tight trio now. So all those pressures and emotions are very hothoused within this trio, and I think that creates a very interesting tension. Things about them get revealed which you haven’t necessarily seen before and the kind of pressures take their toll. There’s a deep connection but there’s also a splintering there between them in various ways, which is very much teased out as well.”

Much of that splintering comes from McTavish’s Saint, who’s been offered a chance to be reunited with his late wife and child — in exchange for stopping Jesse. “I take the approach,” says McTavish, “certainly in the first half of the season, that the Saint’s journey is really motivated by love, which might sound surprising given what I do to people. But love’s very powerful. He will do anything to get what he needs. Rather than view him as a machine, which I think is a mistake, he’s just an extremely motivated force that doesn’t stop for anything or anybody.”

McTavish cuts a mean figure on set in his 20-gallon hat and trench coat, dried blood caked on his large hands. He tells SFX the blood was actually executive producer Seth Rogen’s idea... “Seth came up with this idea, that one of the first things I do is rip a man’s tongue out from his head. That’s what you do to people who lie to you. So there was a lot of blood involved in that. They decided that he carries all of the results of his violence with him. So his body is really just covered in blood and all of that sort of stuff. He doesn’t go and clean himself up after he’s had a particularly gory day. It’s all about the layering of his experiences.”

The actor is quick to admit the Saint has an unfair advantage over Jesse. “It helps being indestructible,” he laughs. “That’s pretty handy. They shoot me at one point with about 45 different weapons, which is a very disconcerting feeling by the way. I was standing on a highway and they’re all lined up with all these different guns – machine guns, shotguns, pistols, everything – and they all fired at me at once. It was pretty strange.”

"Sam [Catlin, showrunner] and Seth and Evan [Goldberg] said, ‘How can we get out of that?’ What they do is they give me a little piece of Jesse’s soul. Pretending that I’m gonna be reunited with my family, Jesse gives me the soul, and in doing that he can now use the word of God on me. So I become impotent around him, and at the end of this particular episode he sticks me in an armoured car and sinks me to the bottom of the swamp, thinking foolishly that that’s gonna stop me...

“But what’s interesting from a character point of view is once he gets the soul it changes him. He becomes more human. What that allows in story terms down the line is really interesting, the relationship that can then build between Jesse’s character and the Saint’s character and all of them.”

In the meantime, things aren’t looking too good for our heroes. Having made their way to New Orleans, they’re crashing in a seedy apartment that belongs to an old associate of Cassidy’s. SFX takes a quick walk through the dimly lit set, and notices wallpaper peeling off the walls and coffee mugs endorsing 50-year-old political campaigns. But we’re soon shooed away so Negga can perform a stunt — wearing a full harness beneath her jacket — in which Tulip is dragged across the apartment’s floor by someone... or something.

When we catch up with her afterwards we tell Negga the stunt looks painful. “Not at all. It’s just my acting,” she smiles, faux vanity betrayed by her sparkling Irish lilt. Will Tulip and Jesse rekindle their relationship this year? “Aside from being boyfriend-girlfriend and lovers, they’re best friends; and with all the tumult that comes from being best friends with someone since you’re knee-high. When you break up with your best friend, you miss them, you know? I think it’s as much about that and that companionship as it is about anything else. I don’t think she really needs any man in her life. She needs him in her life, specifically. They genuinely had fun, and she misses that.”

When it comes to fun, however, Gilgun appears to be the expert. During a break in shooting the next scene, he shows us the tattooed runes on his chest, half-covered in make-up, and explains how they’ve confounded the production team. “Tattoos are a big thing in the part of the world where I’m from, and when I had some time off after the first season I went and had a lot of tattoos done. I’d gone to Comic Con and had some of these done and said, ‘Seth, check my new tattoo out.’ He said, ‘Sweet. I like that!’ At no juncture did Seth say, ‘Stop doing it.’ So I thought, ‘I’ll carry on then.’ But we were drunk that night. I was super drunk on the beach. I mean I had to go home with one eye, try and focus on everything with just one eyeball.

“So I had all these tattoos done, and they said, ‘Can you stop doing that then? It’s just the continuity, it won’t match up.’” And what about playing fan-favourite Cassidy? “It’s ace,” says Gilgun. “I have a wonderful time being a drug addict vampire. Fucking sign me up, you know what I mean? I’ve been doing that for years, just without the vampire bit. ‘You’re gonna pay me to be a dickhead and I just have to say other people’s words?’ Yeah, it’s wonderful.”

Preacher season 2 premieres on June 25, 2017 on AMC in the US, and a day later on Amazon Prime in the UK.  For more sci-fi and fantasy news pick up a copy of SFX magazine now, or subscribe so you never miss an issue.