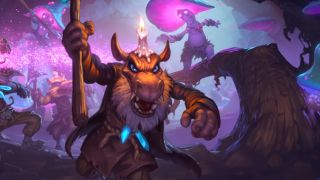 We finally have a date for the release of the next massive Hearthstone expansion, Kobolds & Catacombs. It'll be available on December 7 in North America and December 8 in Europe. Not only does it have new cards so you can update your battle decks, but it has a brand new single player mode called Dungeon Run. You know, for when you get just exhausted humiliating opponents on ladder.

"Essentially, Kobolds & Catacombs is the dungeon to end all dungeons," say designers Peter Whalen and Dave Kosak. "This set really is all about dungeons and treasure. We took a lot of our favorite dungeon crawl tropes and translated them to Hearthstone, and this is the result." They also promise "terrible, terrible monsters, weird traps, rooms full of lava, and all sorts of bizarre things."

You can pre-purchase the new Kobolds & Catacombs cards in preparation now. We'll have another exclusive Hearthstone video for you next week.