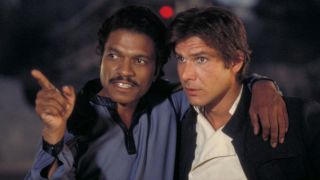 The Han Solo movie is adding another familiar face from the original trilogy to join the Millennium Falcon owner on his standalone adventure. With the movie set to take place years before we originally meet Han, it's no surprise that casting directors are on the prowl for an actor to play a younger version of Lando Calrissian.

The pair have a history in the Star Wars universe: they share the same gambling streak and fondness for cards that led to Calrissian losing ownership of the Falcon to Han. Now that the hunt is on for an actor to tackle the role, originally played by Billy Dee Williams, we're likely going to see more of their camaraderie in its early days. The question remains: who's in line for the role?

According to Birth.Movies.Death the duo are already eyeing a contender for Lando - Donald Glover. Straight off the bat, he seems like a great choice for the part. His stint on Community shows that he's more than qualified to handle comedy, and his recent work on FX's Atlanta and The Martian showcases his ability to deliver dramatic material. He seems like the type of actor who would make Calrissian his own, instead of just mimicking Williams' take on the role.  Filmmakers Chris Lord and Phil Miller took time to locate the perfect Han Solo, auditioning thousands of actors before settling on their first choice Alden Ehrenreich. So if they take the same approach here, Glover's their man.

But, as the site explains, no formal offer has even been made yet. This could be a matter of Lord and Miller crossing their fingers and hoping that Glover's interested, especially as his career is taking off in many directions at the moment. Let's hope that real negotiations start soon.

Directed by Phil Lord and Chris Miller, the Han Solo spin-off movie is scheduled to open on May 25, 2018.