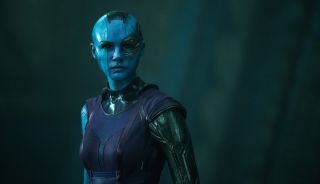 Although she didn't have much screen time in Guardians of the Galaxy, Karen Gillan left quite the impression as the villainous Nebula. The actress will be back in the blue makeup for Guardians of the Galaxy Vol 2, and director James Gunn has teased a much bigger role for Thanos' rebellious daughter in next year's sequel.

Nebula is a huge character in @GotGVol2. @karengillan has her makeup applied every day of her many days on set. https://t.co/6oFuHEHVCCJuly 4, 2016

This is great news; Gillan was great as Nebula in Guardians, but it felt like we only scratched the surface of the character - the same can be said for Zoe Saldana's Gamora - so it's good to hear that they'll be a little more meat on the bone this time round.

Gunn also took the time to reveal another major difference between the two Guardians films - specifically, that Vol 2 will have a little more of a sci-fi bent to it - while dropping the names of a few more Marvel characters he'd love to see on screen...