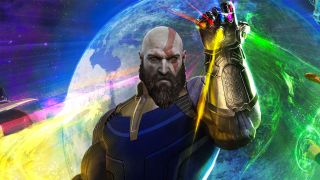 It turns out that Avengers: Infinity War crossovers are happening all over the place in games right now, including Thanos dropping into Fortnite and the fact you can basically get a God of War Infinity Gauntlet to make sure that Kratos is channelling all the godly powers.

Although Kratos doesn't get the same kind of universe-controlling powers that Thanos boasts, he can get his hands on some directly Infinity Gauntlet and Infinity-Stone-inspired items on his travels through the nine realms.

The God of War Infinity Gauntlet actually takes the form of a gauntlet talisman known as the Shattered Gauntlet of Ages, which is described as follows in-game:

"An ancient relic of Hel deemed too powerful  to remain whole, fragments of its former strength lie scattered throughout the realms..."

How to get the God of War Shattered Gauntlet of Ages

If you want to get your Kratos closer to Thanos, you'll need to complete the Family Business quest that you'll be given by Sindri. Towards the end of the quest, you'll find the remains of the dead men on the boat and be attacked by a Traveler. Defeat it and you'll be gifted the God of War Shattered Gauntlet of Ages talisman.

Once upgraded, the God of War Infinity Gauntlet - sorry Shattered Gauntlet - is capable of holding up to three enchantments. But what makes things even more Infinity-War themed is that there are six enchantments that you can find alongside the Shattered Gauntlet of Ages, which function a bit like the Infinity Stones. And if you equip three of the below at once, that's when the magic happens. The talisman actually gains the ability to shoot a very Thanos-like beam at enemies.

Although there are six in total, you actually just need three because that's all you need to power up the gauntlet as it only has three fillable sockets. Maybe don't go for the ones that require you to defeat the God of War Valkyries...

Basically the Soul Stone, Advari's Soul has the chance of granting you a health burst on any successful Runic Attack kill.

How to get it: Complete Brok's Deus Ex Malachite favour

God of War's version of the Reality Stone grants you Fortification if you hold L1 for several seconds, which causes an explosive knockback after the next successful block.

How to get it: Defeat the Helheim Valkyrie, Rota.

3. Eye of the Outer Realm

The in-game answer to the Space Stone doesn't actually grant you any in-game perks, apart from some stat boosts.

How to get it: Found in the Hidden Chamber of Odin in Helheim

The God of War Mind Stone weakens any enemies within 15 metres, making them more vulnerable, which is very handy indeed.

How to get it: Defeat the Alfheim Valkyrie, Olrun.

As you'd hope from a Power Stone, the Muspelheim's Eye of Power gives you a lovely strength, defence and vitality boost, but also increases your resistance to burn damage by 20%. In fact, if you level this enchantment up, that can stack to 60%. Nice.

How to get it: Purchase it at the Muspelheim shop.

The clue's in the name for this one, as the temporal enchantment is actually the Time Stone, which makes sense as to why there's a low Perk activation chance to temporarily slow nearby enemies after you've damaged them.

How to get it: Defeat the Valkyrie Queen.