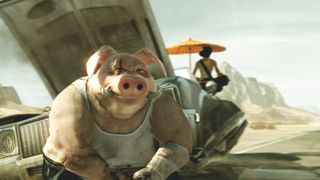 Whether they're loveable sidekicks, lazy roommates, or pyschotic enemies, porcine characters have been appearing in games throughout the history of Sony's sty(lish) consoles. Try not to squeal too much as we fly high with PlayStation’s premier porkers.

If ever there was a pig we wouldn’t want to meet down a dark alley, first pick would be Piggsy, a psychopath in a hog mask who’s more than a few curls short of a tail. That’s because Piggsy is a renowned snuff film star, whose weapons of choice are a chainsaw and shrieking disturbingly. Oh, and his diet is human body parts.

Every hero needs their streaky side-pig and Reuben fits the bill. An early scrape with him gives you a choice, as Telltale games are wont to do. Make him flee or keep him by your side? Choose the latter and your farm friend gets a black eye, which just seems silly. Who wants sore scratchings?

As game pitches go, this is a doozy – remake Worms with pigs dressed up as WWII soldiers. It’s an absolute porker as well, keeping Worms’ humour while adding tanks into the explody equation of its arsenal. Bonus marks for the “Born To Grill” pun on the case.

The upcoming Monster Boy And The Cursed Kingdom, an homage to Sega’s Wonder Boy, missed its original 2015 launch, but on the strength of its smoking pig (no, not BBQ pork) we’re already excited. Mainly because of the way his piercing eyes reveal plenty of contempt for the game’s carnivores. He ain’t got time to have smoke blown up his snout.

Pey’j is almost certainly the world’s first half-pig, half-revolutionary leader. Which also makes him a target for the villainous DomZ, who manage to off him. Or do they? Before he gets sent to the great slaughterhouse in the sky, Jade manages to bring him back. As for the sequel, will Ubisoft ever save its bacon?

Hate them or tolerate them, the green pigs that were once as ubiquitous as Minions have graced Sony’s consoles in multiple forms. However, it’s hard to top the adorable Pig Empire of the Star Wars-themed spin-off, complete with swinetroopers to topple. If you’ve had your fill of blasting nerf-herders on Battlefront, these are the pigs you’re looking for.

Professor Pyg isn’t the focus of Arkham Knight, but his story is easily its best quest. After investigating a series of disfigured bodies, Bats tracks the mad prof to his lair and discovers the process of creating a Dollotron: a faceless, brainwashed person who has been “perfected.”

Another Telltale pig? Are these games made just before lunch? Not that we can complain when we get a squealer as witty as Colin. He’s soon demanding cigs and booze from Bigby, while informing him how much people hate and fear him. He’s got a point, mind, considering Bigby destroyed his house in a previous life.

The cottage industry around bacon is astounding. There’s bacon soap, bacon lip balm, even bacon condoms. Really. By comparison, this Bacon Dynamic Theme for PS3 (the PS4 theme is US-only) is a thing of restrained beauty. Just look at how its sizzling meat glistens. Get this or forever be a silly sausage.