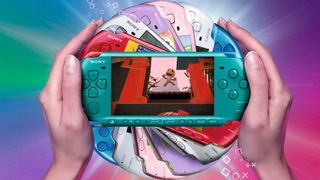 We still have a lot of time for the PSP. This little portable aimed at being a PS2 that you could fit in your back pocket, and although it never quite managed that, there's a heck of a lot of great things about the PlayStation Portable. Not only was it home to some of the best PS2 games of all time, which gained a new lease of life on the handheld, it also boasted its very own collection of brilliant creative, weird and ultimately best PSP games.

If you could forgive the heft of the system and clunkiness of a single analog nub, the PSP was a wonderland of rich games that felt perfectly nestled between the short experiences found on, say, a GameBoy, and the lengthier experiences found on PS2. So let's take a moment to celebrate and recognize 25 of the best PSP games of all time, all of which have (more or less) stood the test of time.

Got a minute? How about half? Good, because that's all the time you get to save the whole dang world.

Developed by Marvelous Entertainment, Half-Minute Hero turns standard RPG conventions on their head by holding players to a 30-second time limit in which they must battle fiends and build up their powers in order to save the world. Luckily, that timer can be reset, and the fun comes in using each groundhog day scenario to push forward towards greater enemies, acquire better gear, and become generally better at kicking ass in thirty seconds or less. Half-Minute Hero is a game that tries its damndest to defy categorization, but you won't have time to care what it is.

For a game that deals in death and destruction, Killzone: Liberation remains not only one of the most polished and prettiest games on the PSP, but it's arguably the best Killzone game ever made.

Liberation swaps the FPS vantage point for a top-down isometric view that rewards fast trigger fingers as much as tactical thinking. The game is also tough, training players to think before they shoot and perfect their approach in every mission. Rather than a glut of weapons and upgrades with no perceivable benefits, a huge assortment of tech and skills will keep you constantly reconsidering what the best way to play is. With the addition of one of PSP's most robust ad-hoc multiplayer modes, Liberation is truly one of the PSP's killer apps.

Why Level-5 felt obliged to rewrite Joan of Arc's history instead of creating a French heroine of their own is beyond us. But no matter, because this magical, demon-fighting version of the historical figure does a fine job of leading one of the deepest and most creative tactical role-playing game on the system.

Like Tactics Ogre and Final Fantasy Tactics, Jeanne D'Arc sees players taking on battles throughout an overworld map, collecting new team members and leveling their teams along the way. Innovative choices like using skills stones over classes, or setting time limits for each battle give Jeanne D'Arc a play style all its own, while the anime presentation and swift-yet-complex battles do their part to hoist it above others in the genre.

The name's XJ-0461. Clank XJ-0461. Remember it, because if you're in the mood for a cool and efficient Ratchet and Clank spin-off, you can call on Secret Agent Clank to handle the job.

Clank pulls off this solo adventure with class, blending traditional Ratchet and Clank gameplay with a nice variety of 3D platforming diversions. You'll speed through vehicle levels, lord over Gadgebot objectives, play out Quark's exaggerated memories, and even blast away foes with Ratchet. With numerous gadgets and outlandish weapons at his disposal, and familiar friends to fill in the gaps, Clank's spin-off comes fully-loaded with the series' trademark creativity and polish.

Screenshots don't do Every Extend Extra justice, as it's easy to dismiss Q Entertainment's shoot-'em-up as a colorful mess. Spend time learning the ropes and wrapping your head (and eyes) around the explosive gameplay, however, and Every Extend Extra will leave you star-struck.

The mission is straightforward: detonate a ship to set off chain reactions and keep doing so until each main boss is destroyed. It's learning how to detonate strategically and when to risk it all for power-ups that make each level a hybrid of twitch gaming and puzzle solving. What's more, each stage features new enemies, backgrounds, and music composed by Tetsuya Mizuguchi (Rez, Lumines), making Every Extend Extra a game that always has something new coming up in its playlist.

Seven was indeed a lucky number for Nihon Falcom's action RPG franchise. Ys Seven represents an evolution of the series, evolving Ys' 2D sprites and environments into a full 3D adventure with new party members to discover, new systems to fine tune, and fresh new ways in which to dispatch justice in Altago.

You'd think a 30+ hour RPG would wear out its welcome on a portable system, but Ys Seven's satisfying combat, rich world, and fascinating storyline keeps the quest feeling lively and fresh.

Mega Man Powered Up is not just a remake of the original NES game. It earns its place here by drawing from the series' humble beginnings and reimagining them with cutesy new graphics, two new levels, and modes of play that let you swap Mega Man for one of his robotic bosses. Think of it like The Muppet Babies if the Muppet Babies were constantly blowing each other up to snatch their abilities from each other. If that weren't enough to keep old school fans busy, it comes with a level editor and the ability to share player-created Mega Man stages with the world.

Ape Escape: On the Loose is a pristine, thoughtful remake of the PS1 original with upgraded graphics and a smattering of new monkey-themed minigames. The translation isn't perfect, and the controls miss something without the second analog stick, but the game's mix of platforming challenges, gadgetry, and charm overshadows these few complains. Ape wrangling is messy work, after all, but in the end it's worth it.

Kingdom Hearts: Birth By Sleep would have been easy to turn into a quick cash-in; a portable Kingdom Hearts to milk fans perpetually waiting for a proper sequel. Instead Square made one of the most important games in the series, filling out the strange world's lore with the same level of care and ambition as other titles in the series such as the epic Kingdom Hearts 2. Long before Kingdom Hearts 3 was announced for PlayStation 4 and Xbox One, this was the closest thing everyone thought we would get to a third full game.

Heroes Terra, Aqua, and Ventus make for a disorienting shift from Sora, but the game's Command Deck and D-Link combat mechanics help to keep the adventure moving with fast, fluid, and surprisingly deep enemy encounters. It only takes a few visits to familiar Disney locales to ease back into the Kingdom Hearts vibe.

Gran Turismo PSP is a title that had no business looking and playing as good as it did on the PSP. Polyphony Digital barely took its foot off the pedal when creating an exclusive GT experience for Sony's portable, and the result is a standalone title that purrs.

No doubt, GT is great to look at, but it also packs a lot under its hood. With over 800 cars, 35 tracks, and 60fps of raw racing performance, it makes up for its lack of a traditional career mode or some of the deeper customization you'll find elsewhere in the series. Plus, GT PSP's ad-hoc vehicle sharing and one-off multiplayer races are a nice touch.

Turn to page 2 for more of the best PSP games...