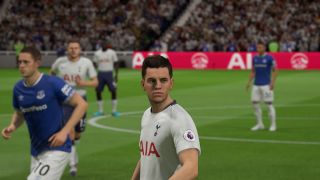 A decent summer of business for Spurs concluded with the North Londoners importing Real Betis’ star Argentinian on transfer deadline day, making the Giovani Lo Celso FIFA 19 stats board essential reading for all White Hart Lane season ticket holders. Essential reading with what looks to be a very happy ending, too: FIFA 19 suggests Lo Celso will be a roaring success in the capital.

There are a total of five Giovani Lo Celso FIFA 19 cards, the most alluring of which is an 85-rated item which marked his appearance in the Europa League Team of the Group Stage. His other cards boast OVRs of 83, 82, 80 and 80 respectively, the matching scores for the latter pair explained by him having spells with both Betis and PSG last season.

Lo Celso’s gold January upgrade card, rated 82, is currently considered his ‘base’ version and therefore will be our focus here. It holds up very favourably against Tottenham’s other central midfielders: not quite on the same tier as Dele Alli (84), but superior to Eric Dier (80), Moussa Sissoko (76), Harry Winks (75) and the apparently outbound Victor Wanyama (80). In theory, then, he should walk straight into the first team.

While not blessed defensively, the South American is equally no slacker. He earns 68 for both standing and sliding tackle, 67 for strength, and 66 for interceptions. A pace score of 78 also enables him to get up and down, aided by a stamina rating of 81.

Lo Celso’s FIFA 19 potential in career mode is a very encouraging 88. He has every chance of developing into one of the world’s best midfielders.

That sentiment is echoed by everyone’s favourite dugout sim. The Giovani Lo Celso Football Manager 2019 stats profile is a formidable one, with three categories where he earns 16 out of 20: first touch, passing, and teamwork. 15s are scattered liberally too: he nabs that score for crossing, technical, determination, flair, and vision.

Only two scores fail to reach double figures for Lo Celso in Football Manager 2019: marking (9) and long throws (8). Spurs fans won’t mind either of those flaws once he starts chipping in with assists for Lucas and Harry Kane.