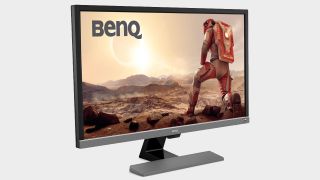 Black Friday itself may be over, but the deals are still coming. In fact, one of the best deals has only just gone live: you can grab an excellent 28-inch 4K gaming monitor for just £199.99 on Amazon, saving you £60 but also bagging you a whole lot of quality monitor for your money. The BenQ EL2870U has won rave reviews across the internet thanks mainly to its lovely 4K resolution and HDR tech, perfect for gaming, and it's not-wallet-destroying price. So perfect, in fact, that this screen made it onto our list of the best gaming monitors.

For those looking to have long gaming sessions, the screen features BenQ's unique eye-care technology, which removes harmful blue light that can damage eyes and alters the brightness of your on-screen images based on your surroundings. And, If you have an AMD graphics card, the BenQ EL2870U is enhanced with native FreeSync support. It's also got a rapid 12ms response time and a good 60Hz refresh rate. The former is excellently fast, and the latter is not the quickest but prime for 4K gaming. It's those things that elevate this to a top-tier affordable gaming monitor. Elsewhere you're well covered when it comes to ports: there are two HDMIs, one DisplayPort, and an audio jack - and built-in speakers as a bonus - though you'll probably want to browse the Black Friday gaming headset deals to pick up great audio providers alongside this screen.