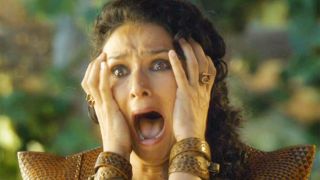 The news comes from a leaked production doc obtained by Watchers on the Wall. We can’t post it here, lest the HBO ninjas grab us, but the title is one thing that stands out: Bloodmoon.

Yep, the Games of Thrones prequel title is Bloodmoon or, at least, that’s what we’re being led to believe. Game of Thrones has previous for protecting spoilers and secrets with CIA-levels of security and sleights-of-hand, so don’t be disappointed if that proves to be the case once again.

But I sure hope it is Bloodmoon. For one thing, my Dark Souls Sense is tingling. It’s already conjuring up pictures in my mind of sprawling Gothic castles and nasty beasts lurking beyond the pale light in the distance. Plus, with George RR Martin already in cahoots with From Software for the development of Elden Rune, it acts as a nice callback of sorts.

For the longest time, we assumed the Game of Thrones prequel title would be The Long Night. Heck, George RR Martin has even said on his own personal blog that The Long Night would be the name he “would prefer.”

But it seems like Bloodmoon may have usurped it. If the leak rings true, this could be the first time you’re hearing about something that’s bound to become a household name over the next year or so. That’s exciting, isn’t it?

Check out this week's Release Radar, our weekly round-up of what's coming your way in games and entertainment, down below!