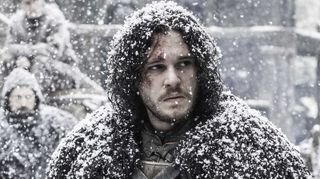 WARNING: This article contains spoilers for Game of Thrones.

The latest hour of Game of Thrones saw the predictable, though satisfying ressurection of Kit Harington's Jon Snow. The death of the (former? newly re-instated?) Lord Commander certainly left an impact on fans of the show, and it's also going to significantly affect Snow himself going forward.

"At first, I was worried that he’ll wake up and he’s the same, back to normal — then there’s no point in that death", Harington told Entertainment Weekly. "He needs to change. There’s a brilliant line when Melisandre asks: ‘What did you see?’ And he says: ‘Nothing, there was nothing at all.’ That cuts right to our deepest fear, that there’s nothing after death".

"That’s the most important line in the whole season for me. Jon’s never been afraid of death, and that’s made him a strong and honorable person. He realizes something about his life now: He has to live it, because that’s all there is".

"He’s been over the line and there’s nothing there, and that changes him", Harington continued. "It literally puts the fear of god into him. He’s seen oblivion and that’s got to change somebody in the most fundamental way there is. He doesn’t want to die ever again. But if he does, he doesn’t want to be brought back".

It's going to be really interesting to see what the showrunners have planned for Snow post-resurrection, and Harington promises a busy season for his character:

Season 6 of Game of Thrones airs Sundays on HBO in the US, and Sky Atlantic on Mondays in the UK.