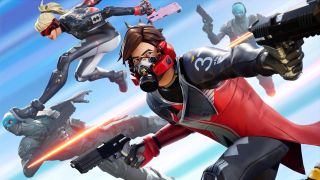 Fortnite Season 9 has officially started and as you'd expect there are big changes: a new map, new locations, challenges, slipstreams, Fortnite Sky Platforms. There's a lot to take in so lets take a look at it all now and see what's new:

When does Fortnite Season 9 start?

Fortnite Season 9 started on Thursday, May 9. There are currently 10 weeks in the season with week 10 challenges unlocking in 64 days. Assuming there aren't any delays or overtime then Season 9 will end on July 12, 2019.

How much does the Fortnite Season 9 Battle Pass cost?

If you're wondering how to get free Fortnite V-Bucks, you earn by playing and levelling up your Battle Pass so get busy and you can earn enough for Season 10.

There are two new progressive skins in the new Fortnite Season 9 Battle Pass called Rox and Sentinal. Rox has 5 stages unlocked at 10,000, 50,000, 100,000 and 200, 000 XP and different6 colour options, while Sentinel has a second style that unlocks at Battle Pass Tier 99. There's there's Vendetta all they way up at Tier 100 skin to unlock. On top of the skins there's also Kyo, a new robot cat pet with a range of colours to unlock

Tilted is gone, long live Neo Tilted. Fortnite Season 9 is all about the future so we have a sci-fi re-woking of the maps most contentious area. Retail is now Mega Mall and similarly futuristic, while the volcano is now Pressure Plant. Other changes on the map include a new Slipstream system providing a new way yo get around the map via a corridor of air that loops the map. There are also Sky Platforms dotted around the map you can use to get back into the sky.

Let's take a look at it all in more detail.

Neo Tilted is the... new Tilted

Tiled was barely goner and now it's back with a new super futuristic redesign punctuated by the new Slipstream airways. It's still got plenty of height but now it's also more open with central plaza that has 'certain death' written all over it.

Retail Row has also had a future make over and is now Mega Mall, a large flat area focused on a large mall that looks like it will create some confined fights to survive. The mall also provides some height that looks over the surrounding terrain so expect some sniping threat.

Slipstreams now carry you around the island

The new Slipstreams could have a big impact on the game. They're effectively air tunnels that form a highway to let you you travel quickly from location to location. How that will affect to Storm's threat remains to be seen. Interestingly, Slipstreams can take vehicles which is likely to be chaos.

Fortnite Fortbytes are a new collectible and there are 100 of them!

Fortnite Season 9 has added in new Fortbyte collectibles. Week one started with 10 to collect with more promised more or less daily. Some are unlocked by completing challenges, others involve emotes and costumes in specific places. Collecting them all will "decrypt a mysterious image" as well as rewards and "secrets of Season 9".

There's a new Combat Shotgun, while the Pump's vaulted and a few other weapons have changed

There's a new semi-auto Combat Shotgun that holds 10 shells and fires nine pellets a round with a base damage of 73 / 77 / 81 for Rare, Epic and Legendary variants. Elsewhere in shotgun news the Tactical Shotgun's had a buff to it's damage, while the Pump's been vaulted for now. Also hitting the vault are Clingers, Buried Treasure, Poison Dart Trap, Scoped Revolver, Suppressed Assault Rifle, Thermal Assault Rifle and Balloons. Grenades, on the other hand are leaving the vault. Other changes see Drum Gun and Boom Bow availability reduced.