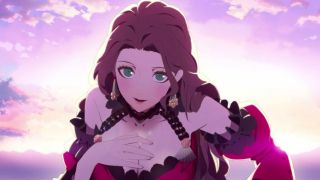 The Fire Emblem franchise has made a name for itself thanks to its turn-based tactical combat and storytelling, but love is also one of the big features of the series. Fire Emblem: Three Houses' romance works a little differently to past entires, but, for the most part, it continues to prove that the relationships you form are at its heart.

With plenty of swoon-worthy characters, you'll build deep bonds with those you journey with through your lengthy play-throughs. As these bonds grow between the cast, it can even lead to marriage. There is no child mechanic in Three Houses, so you won't be able to teach your offspring how to wield a lance, but a powerful relationship will help lovers fight with more intensity when they are together on the battlefield. They'll also unlock special art and dialogue between characters, so you'll want to put some time into finding love while you're exploring Gregg Mach Monastery.

Three Houses, while epic, can be confusing at times. There are a lot of systems to dig through while you're playing through the main story and love interests can fall to the wayside if you aren't careful. Here are a handful of Fire Emblem: Three Houses romance tips to help you get the most out of your time looking for love on the battlefield.

Love doesn't blossom until the end

Unlike other Fire Emblem games, marriage in Three Houses doesn't take place until after the main story when the war is over. Jeralt, the player characters father, will give you a ring before the time jump. Once you've made your way through the story you'll be able to choose who you give it to.

The final decision unfortunately happens via a menu selection, so don't expect to go running through the monastery to profess your love. There is an additional cut scene and story information once you've made your decision though.

Picking a house is crucial

Everyone must make a tough decision at the beginning of Three Houses, picking between the titular three houses: Black Eagles, Blue Lions, or the Golden Deer. Each house comes with a unique set of characters and while you can recruit a few students from other houses, some characters will immediately go off the market if you don't select their house.

The Black Eagles’ Hubert is dedicated to Edelgard, and Dedue is devoted to the Blue Lions’ Dimitri. I'm not entirely sure if they are able to be wooed at all, but not choosing their respective house makes bonding with them far more difficult.

The students in your house are far easier to romance since the act of teaching actually helps your relationship with them grow. If you're set on a certain character, be sure to pick their house. That's not to say you have to marry a student, faculty and knights are more than available as well.

Deliver lost items to their owners

Throughout your time in Fire Emblem: Three Houses you'll come across lost items in the monastery. An old ratted coat or some training gear will be strewn about the map, returning them will be extra effective in bonding with that character.

Returning items, and giving gifts purchased at the merchant stands, are vital in getting relationships started. You can't have support conversations, enjoy tea together, or recruit characters until their base support level is raised.

Returning lost items is also a fun little scavenger hunt, you'll need to think about character habits, likes, and dislikes in order to figure out who owns the lost item.

Once you achieve a strong enough bond with someone (by offering them gifts, lost items, and using them in fights) you'll be able to invite them to tea. Tea is a great way to bond with a character as there are several opportunities for relationship growth during tea time.

First you can choose the type of tea. Some types are catered towards nobles while others are designed for commoners. Other types are equally enjoyed by all but loved by no-one. Try and cater your choice of tea to whoever you're drinking with by checking out the description to see if it matches their character profile.

Once you're at tea you'll have to hold a conversation with your chosen character. Conversations happen in three parts. If you choose the correct dialogue option (out of three choices) that matches the characters personality then you'll be able to give them gifts and "observe" them (similar to the odd rubbing part of Awakening) which increases support levels even more.

Support conversations, which was the primary way to bond in previous Fire Emblem games, are still important in Three Houses. Once you do enough for a relationship to grow you'll be able to have a support conversation with select characters.

You can do so by pressing X to open the menu, navigate to the support selection, and then picking your character of choice. Support relationships are ranked from C to S, with ranks increasing as you grow closer to your soldiers.