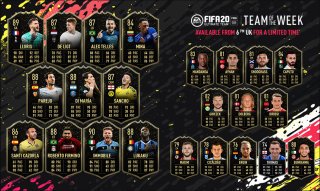 For the FIFA 20 TOTW 21, there's a lot of highly rated players after a number of them excelled over the weekend. Immobile tops the list with a 90 overall, but he's closely followed by Lloris at 89, four different players at 88, and three at 87. There's a number of excellent FIFA 20 players you could pack in the FIFA 20 TOTW 21 available from 6pm today, and we've got the full list below.

Thanks to Ciro Immobile's brace and assist in Lazio's 5-1 thrashing of Spal, he features in the fourth Team of the Week on FIFA 20. Hugo Lloris, Spurs 'keeper is also there after they caused an upset and beat Manchester City 2-0, while Angel Di Maria is also there after he scored in PSG's 5-0 win over Montpellier.

Roberto Firmino didn't score but he did get three assists as Liverpool continue their dominance with a 4-0 win against Southampton, and Romelu Lukaku continued to silence his doubters by scoring both goals in Inter's 2-0 away win against Udinese. Jadon Sancho, Borussia Dortmund's young English winger, is also included after scoring and assisting against Union Berlin. Here's the full FIFA 20 TOTW 21: