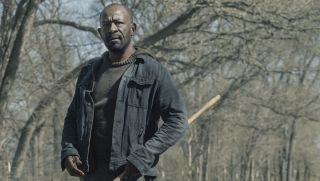 The dead are not going anywhere anytime soon, and neither is Fear the Walking Dead. The Walking Dead spin-off has been renewed for a sixth season, with the news being announced during the show's San Diego Comic-Con panel.

Fear the Walking Dead is currently airing in the United States, with the midseason finale due to be broadcast this coming weekend. The opening minutes of the episode were also shown at SDCC, and can be watched below.

"Fear the Walking Dead has been renewed for a Season 6," showrunner Scott Gimple said at the event, according to CBR. He went on to tease further spin-offs from the main Walking Dead series.

"There's a big secret about The Walking Dead universe all these years," he said. "All along, there have been other civilizations that survived the apocalypse. We're about to show a lot more of the world in a bunch of different projects.

"We're working on another series now about young people who grew up behind walls in a first-world situation compared to what we've seen. These kids could stay where they grew up but instead, they leave while being pursued by their adult friends."

A trailer for the second half of season 5 was shown at SDCC, and featured Logan (Matt Frewer), Dwight (Austin Amelio) and Sarah (Mo Collins) teaming up for a drag race, while Al’s (Maggie Grace) films the entire thing.