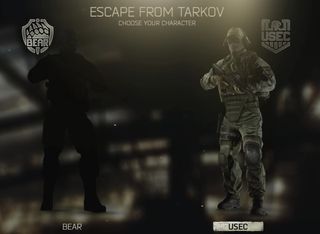 What's the difference between Escape From Tarkov BEAR or USEC? That's the question you'll likely be asking yourself when you begin Escape From Tarkov, because you need to pick your character before you do anything. We've got the details on exactly what this means and the benefits of choosing each one, so you can make an educated decision.

Escape From Tarkov BEAR or USEC?

The biggest and most obvious difference between BEAR and USEC is that BEAR is Russian, whereas USEC is American. This means that their in-game chatter differs; if you don't understand Russian and you pick BEAR, you won't be able to understand what your character is saying in-game. The same applies for USEC if you don't understand English. With that said, in-game chatter isn't a huge part of the game, but it can be useful if you're playing in a group but not using voice chat.

This isn't confirmed to be absolutely true, but according to GamersHeroes, BEAR characters don't respond to taunts which helps you to stay hidden, while USEC will. On the other hand, BEAR will sometimes taunt after a kill. Again, this isn't definite, but is allegedly the case.

Depending on which version of the game you buy, any starting weapons you're given will also depend on the character you pick. For example, USEC will favour guns like the MP5, whereas BEAR will start with an AKS-74U. Later down the line, BattleState Games has said they'll be implementing other faction bonuses like making the BEAR characters have increased skill with Kalashnikov weapons and heavy armor, while USEC will be focused on light/medium armor and American-manufactured weapons. There's no ETA for when that feature will be added to the game though.

Remember that server wipes happen semi-regularly and when they do, you have the option to change faction. So your initial pick isn't the be-all and end-all, don't worry!