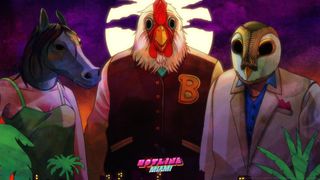 UPDATE: Apparently we all got fooled by that alleged Hotline Miami teaser, because the Twitter user has now informed us that it was all a big joke.

Like I said, nothing to see here. This was a prank that went way, way, way further than I ever thought it would. Sorry folks! 🐓 pic.twitter.com/XQS6h9rWqzAugust 6, 2019

Everyone got so excited by the thought of something new in the Hotline Miami universe happening that we all got swirled up in the hype. So much so that the official Hotline Miami account had to comment on the teaser.

This is a very cool fan film (or teaser for one maybe) but rest assured there is not another Hotline Miami game in development. https://t.co/NO4TzOdSmi5 August 2019

So it seems nothing Hotline Miami-related is coming soon. Sorry folks.

Original story: The ultra violent neon tinted shoot em’ up Hotline Miami was brought to a conclusion in its second instalment Hotline Miami 2: Wrong Number. But Hotline Miami 3 could be being teased by a Twitter account with the handle Jacketisnotdead ('Jacket' being the nickname of the main hero), seemingly trying to bring the series back to life with a short teaser video of what could either be one very cool fan-made film, or the less likely idea that it’s hinting at sequel.

The short video is suitably stylised with Hotline Miami flare and takes us on a tour of a moment in a fight, with a bat floating through the air and bullets spraying. While it doesn’t really reveal what it’s directly hinting at, it does end with the promise of releasing a “full trailer soon".

Interestingly, the Twitter account only follows a handful of other users, all of which are people and developers associated with the game, including Abstraction games who are responsible for publishing the game on all platforms including the PS3. Since the Twitter account isn’t verified and nothing is in the air about an official announcement, it is probably a fan-made film inspired the games. But if the teaser which pays homage to the style and soundtrack of the series is anything to do by, it's probably going to be a pretty darn good one. I for one will definitely be keeping an eye out for more.