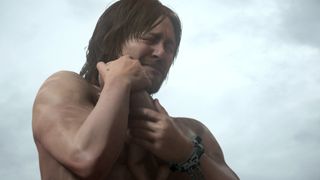 Looks like there won't be any Death Stranding at E3 2017, according to a tweet from Kojima. Possibly. He could be trying to trick us, he's a bit like that.

Apologies to our fans, Death Stranding will not be @ E3 as we are fully focused on development. Pls see me with @geoffkeighley on 6/14! pic.twitter.com/w9JfmEOqF4June 7, 2017

What is interesting is that while Kojima says Death Stranding is skipping the show, he will actually be there and is lined up for a talk at E3 Coliseum , a two day series of presentations produced by Geoff Keighley.

This is Kojima's talk:

Wednesday June 4 3:15 PM – 4:15 PM:
A Conversation with Hideo Kojima and Jordan Vogt-Roberts
A one-on-one session looking back at the career of Hideo Kojima, led by Jordan Vogt-Roberts, director of Kong: Skull Island. These two creative forces will share the stage to discuss the fusion of gaming and cinema. Mr. Kojima will discuss his cinematic influences and how they have allowed him to make masterworks of his own.

I think it's highly unlikely we'll get through E3 without Kojima mentioning Death Stranding at least once, and a new trailer's not out of the question, but it sounds like the chance of any sort of gameplay is probably slim to none.

It's worth noting that the image Kojima tweeted out the news with links back to a badge we last saw Guillermo del Toro wearing:

Okay, still no idea what 'Bridges' actually means, but it's clearly a key motif in the game. If anything does happen, we'll likely get it at Sony's E3 2017 conference which will begin at 6 pm PDT on Monday, June 12/2 am BST on Tuesday, June 13 in the UK.

While we cross our fingers and wait, take a look at the video to see we've managed to work out/guess about the game so far. And, to make sure you don't miss anything, here's the full E3 2017 schedule.