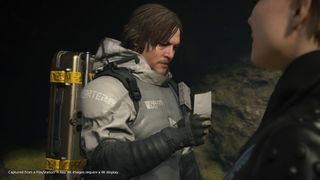 Will there be any Death Stranding DLC to continues Sam Porter Bridges' long, arduous trek across the broken United States of America? There hasn't been any new content for Death Stranding since Hideo Kojima's latest came out, but we can hopefully shed some light for you on all the Death Stranding DLC news, including a potential release date, content, and more.

What do we know about Death Stranding DLC?

Let me get it out there right away; nothing official has been confirmed. That's not to say however, that Death Stranding DLC isn't coming. We've had some teases, leaks, and rumours speculating about what future Death Stranding content there could be, starting with a tweet from Nicolas Winding Refn, the actor who played Heartman.

On the day Death Stranding launched, Refn tweeted out the above image that stated "Heartman will return". Now it's unsure whether the image is referring to Death Stranding DLC or a Death Stranding sequel, but saying that his character will return is a pretty curious statement. Of course, any secret plans could be canned at a moments notice, so it's not an official announcement by any means, but does it hint there's something in the works.

The "leak" also claims that the internal name for the project is "September-1998". This is the month the original Metal Gear Solid released, which Kojima is famed for being the lead director on. So the date holds a lot of weight with Kojima fans, but doesn't have any tie to Death Stranding specifically.

When more news is announced about Death Stranding DLC, check back here as we'll update this with any new information. Until then, keep on making those deliveries.