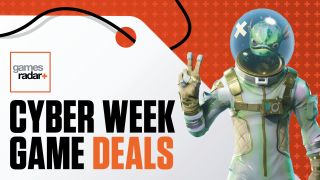 There are still Cyber Week game deals on Nintendo Switch, PS4 Pro, and Xbox One X to be found if you act fast. We're staying on top of every deal to make sure everything you see in our illustrious list is still worth clicking, and for those with nerves of steel some retailers are even shaving an extra few pounds off prices as sale season comes to a close. Whether you need games, accessories, controllers or the consoles themselves, you'll find what you need below.

Even if they're still around tonight, we predict the best bargains will disappear completely before or by December 6, so don't hesitate. The deals most likely to disappear before you can say "savings" are Nintendo Switch Cyber Week price cuts (as Nintendo rarely discounts its products) or Cyber Week TV deals - expect them to sell out fast.

Cyber Week Deals Around The Web

The Cyber Week game deals are still going fast, but we think the best bargains will disappear into the ether come December 6, so don't hesitate and act quick. The deals most likely to disappear before you can say "savings" are Nintendo Switch Cyber Week price cuts (as Nintendo rarely discounts its products) or Cyber Week TV deals - expect them to sell out fast.

All these deals across the web may seem a little overwhelming, but we've done all the heavy lifting for you. You'll find the best Cyber Week game deals below, just a quick scroll away. Yup, we're just talking games, consoles, accessories, controllers, online subscriptions, Lego sets, and more, all on sale and all for you. The Cyber Week board game deals and Cyber Week Lego deals are some of the best we've seen all year - the pricey products are on some serious discount right now, and it won't last There's never been a better opportunity to get a gaming seat than with these Cyber Week gaming chair deals.

Official Nintendo Switch 128GB Memory Card £29.98 If you're buying a Switch, you'll need one of these - and at this price, it's a total no-brainer. This 128GB card will store 10+ games without the need to delete anything. A huge bargain.View Deal

Get two select games for £30 at Argos
Grab two games for just £30 from a great selection of PS4, Nintendo Switch, and Xbox One games including The Division 2, Rage 2 and Assassin's Creed Origins over at Argos. It's a great deal, and you'll want to hurry while stocks last.View Deal

Pokemon Shield on Nintendo Switch only £36.99 (was £49.99)
This is the absolute best-price on this Winter's biggest Nintendo Switch game and Curry's offer a price promise, too. Plus, you get six months Spotify subscription as a bonus. Go for it!View Deal

Call of Duty: Modern Warfare on PS4 and Xbox | £38.99 at Very
This shooter has been holding its value during Black Friday, but Very's £38.99 deal is now the best price we've seen, chopping more than a tenner off the regular price. Xbox edition available here.View Deal

FIFA 20 on PS4 | £36.99 from Amazon (save £11)
It's not cheap, but it's still the cheapest price we've seen for the latest version of FIFA so far this Cyber Week. You'll get the Xbox version for the same price too.View Deal

Resident Evil 2 Remake | £19.99 from Amazon
Capcom's remake of the original PlayStation horror classic was voted for by you as the Golden Joystick Awards' Ultimate Game of the Year. A must-play at this price, even if PS Plus users can pick it up a touch cheaper in the PS4 digital sale.View Deal

The Outer Worlds on Xbox One and PS4 | £34.99 from Amazon
It's not the biggest saving you'll see during Black Friday, but this is the best price we've seen for this fantastic RPG so far. Get the PS4 version here.
View Deal

Mortal Kombat 11 on Xbox One | £22.99 from Amazon
A very tempting price for this gory beat-em-up, and the best we've seen so far this Black Friday. You can also get it for £23.48 on Nintendo Switch, and will have to shell out £22.95 for the PS4 version.View Deal

Witcher 3 on Nintendo Switch | £37.99 from Amazon
Arguably the best RPG of this console generation. If you're looking for an epic adventure to keep you playing Switch long into 2020, this upgraded Complete Edition has even more content in it.View Deal

Borderlands 3 on PS4 | £34.99 from Amazon (save £15)
The latest instalment in 2K Games' rootin' tootin' lootin' n' shootin' franchise, Borderlands 3 has plenty of content to keep players enthralled for hours across all the different planets. You even get five gold keys! You can also get it on Xbox One!View Deal

There're no doors in cyberspace, so Cyber Week doesn't lean so hard on the doorbuster deals. You still have plenty of time to take advantage of all the Cyber Week game deals!