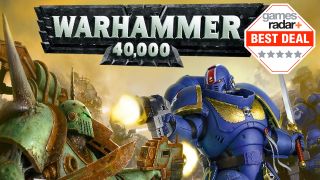 In the grim darkness of the future there is only war, but toget there you'll need a cheap Warhammer 40K starter set - and have we found some for you today. If you were interested in trying out the tabletop wargame for yourself, you'll be pleased to hear that there's a discount on a couple of entry-level kits right now. For example, 'First Strike' is a small but affordable set that gives you rules, miniatures, dice, and more for the reduced cost of £19.88 at Wayland Games. That's a 20% saving, though it's running out of stock so you'll need to be quick. There's only 15 or so miniatures in this set but you'l be able to get a fine introduction to 40K with a smaller arena and mission space. This is a perfect and compact set offering an easy and exciting way into 40K.

Meanwhile, a larger, more in-depth Warhammer 40K starter set called 'Dark Imperium' costs £75.54, which represents another discount of 20%. This is great bang for buck as you get a whole lotta game for your money. There's 53 miniatures in this one, and you'll get thrown in to a larger battle.

Warhammer 40,000: First Strike Starter Set | £19.88 at Wayland Games (save 20%)
If you want an affordable entry-point to Warhammer 40K, it doesn't get any cheaper than this deal.View Deal

Warhammer 40,000: Dark Imperium | £75.54 at Wayland Games (save 20%)
Those looking for a starter set with a full army will be well served with this offer. It's a little pricier, but worthwhile. View Deal

In terms of what's included in these cheap Warhammer 40K starter sets, First Strike is an ideal entry point to the game itself. In fact, it's got everything you need to begin playing as soon as possible; 15 easy-build miniatures (Space Marines and the zombie-like Death Guard), a double-sided battle mat with some cardboard scenery to play on, dice, rules, datasheets, and advice can be found within. It reduces a game that can seem intimidating at first into a more manageable chunk. It's also designed to feel self-contained, much like the best board games.

Dark Imperium sits at the other end of the scale. It's a more traditional Warhammer 40K starter set, crammed with two full-blown armies (Space Marines and Death Guard), rules, dice, and guides. There's an impressive 53 models packed into this box, and they're intricately detailed kits you'll have a lot of fun painting.

Either way, this is the perfect place to start. You'll also be getting a good baseline should you want to collect either army long-term. And there's a good chance you will; both are headliners for Warhammer 40,000 in its current form. The Space Marines are humanity's superhuman protectors that stand against everything the galaxy throws at them (which is a lot, by the way), while their Death Guard counterparts are traitors to the cause who threw their lot in with dark powers.

In short: if you're set on collecting a Space Marine or Chaos army, this is the ideal place to begin.

For more tabletop discounts and recommendations, don't forget to check out the best card games and the best tabletop RPGs.